I think it’s crystal clear by now that it deeply pisses me off how old-school wireless carriers work so hard at limiting what you can do with your smartphone. That’s the antithesis of what wireless is supposed to be, and the Un-carrier has taken a wrecking ball to those barriers over the last two years. Today, we’re at it again, putting an end to one of the wireless industry’s dirtiest little secrets. 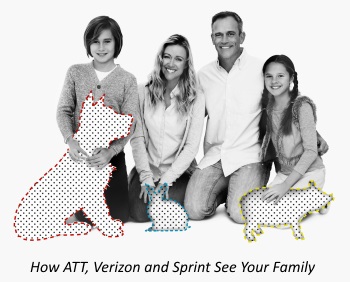 For years, the old guard carriers have had the audacity to shill their so-called “family” plans when, in fact, those plans aren’t even available to the entire family. That’s right. Last year, the carriers spent BILLIONS advertising “family” plans that completely ignore 164 million members of 74 million U.S. households – roughly 3 in 5.

This is a huge problem. The scope of this carrier scam is shocking. But, today, we’re setting it right. Today, we’re launching Pets Un-leashed and expanding our family plans to include your entire family.

While AT&T and Verizon ignore your pets and treat them like they aren’t part of your family, we love your pets at T-Mobile. And, we know that your 24/7 connection to that furry friend is quite possibly even more important than your connection to other humans. So why not make that pet connection stronger and faster with our blazing-fast 4G LTE network? Exactly.

For just $5 a month, you can add your cat, dog, ferret, turtle or, heck, your alpaca to your T-Mobile family plan, and they’ll enjoy all our Un-carrier™ benefits and some awesome new apps like Fetch Freedom, FitPet and SnapCat. Take a look.

U.S. pet owners spend about $50 billion a year on their pets – and approximately zero of those pets are connected. Talk about an under-served population! All those industry analysts who thought the U.S. wireless market was saturated better get ready for us to prove them wrong again. We just found a small continent of new customers that the carriers continue to ignore and treat like second class citizens – well, not the Un-carrier.

Learn more and sign up for Pets Un-leashed at www.t-mobile.com/pets-unleashed.