T-Mobile Doubles Down on Flagship Simple Choice Plan with

BELLEVUE, Wash. - March 7, 2014 - In another industry first, T-Mobile US, Inc. (NYSE: TMUS) today announced the company is offering customers more 4G LTE data and tethering and unlimited international texting - at no extra charge. The updates reflect the latest stage in the evolution of T-Mobile's flagship Simple Choice plan, which launched the company's Un-carrier consumer movement last spring. All Simple Choice customers will automatically enjoy the added benefits of these updates without taking any action whatsoever - in another Un-carrier departure from industry norms.

First, in a move to stay out front of Americans' fast-growing demand for mobile data, the company announced it is sweetening the deal for Simple Choice customers already enjoying unlimited data, talk, and text on America's wicked-fast network - now doubling the amount of high-speed 4G LTE data and tethering to 1GB included in the $50 Simple Choice service plan.

"In the mobile age, wireless data caps and overage fees are just this side of extortion," said John Legere, president and CEO of T-Mobile. "Take the basic plans from the Big Two with ridiculously low data limits that hit you with fat overages each month. It's like getting your data from the neighborhood loan shark and paying 100 percent interest when the bill comes due. It's the classic shakedown."

The expansion of Simple Choice to include more of T-Mobile's fastest data and tethering comes as wireless data usage - and tethering laptops and tablets to the web via connected devices - continues to surge. T-Mobile customers use nearly 50 percent more data now than they did just a year ago when Simple Choice first launched, outpacing the industry's growth rate in mobile data usage. And monthly usage on unlimited 4G LTE plans has nearly doubled to over 5GB.

With these updates, Simple Choice customers still start with one line at $50 per month for unlimited data, talk and text on our nationwide network - but will now get a full 1GB of 4G LTE data and tethering - double the previous amounts. Customers can still add a second line for $30 per month and up to three additional lines for $10 per month. Those additional lines also get the extra 4G LTE data with these changes.

As before, Simple Choice customers can always add more 4G LTE data to each of their lines. They can opt for 3GB of 4G LTE data, including tethering, for an additional $10 a month per line (vs. 2.5 GB previously), or 5GB for an extra $20 a month per line. There is a new unlimited 4G LTE option, which now comes with a full 5 GB of tethering, double the previous amount, for an extra $30 per month (vs. an extra $20 previously).

Second, with the new global texting benefits from the U.S. now included in Simple Choice, T-Mobile is the only US wireless carrier to deliver unlimited international texting to virtually anywhere - now from the United States and over 120 countries and destinations around the world - at no extra charge. Unlike with competitors, there is no need to purchase an additional package or special plan to get unlimited global texting and data. It comes automatically with every Simple Choice plan.

The new benefits will begin immediately on March 23 for customers who choose to run credit and take the postpaid option. For those who prefer not to run credit and opt for prepaid service, unlimited international texting will start on April 26.

"In a couple weeks, every single one of our millions of Simple Choice customers will wake up with more value without lifting a finger," said Mike Sievert, Chief Marketing Officer for T-Mobile. "Who does that? We do. Because that's what being the Un-carrier means - giving more to you without asking more from you. I'd love to see our competitors try to follow suit." 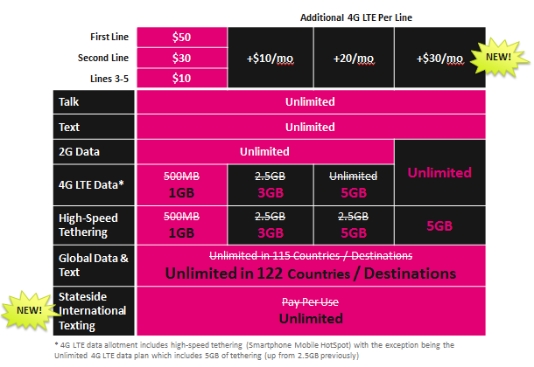