The Un-carrier adds 20 more countries & destinations where customers get unlimited data and texting at no extra cost, while the carriers continue to make their customers pay insane global roaming rates almost everywhere

Bellevue, Washington — September 17, 2015 — Just days after announcing a massive expansion of its domestic LTE coverage, T-Mobile [NYSE: TMUS] today expanded its worldwide coverage, announcing the immediate addition of 20 new countries and destinations to Simple Global™, Un-carrier® 3.0. With today’s expansion, T-Mobile Simple Choice™ postpaid customers enjoy unlimited data and texting at no extra cost and low flat-rate calls for just $0.20 a minute in a total of 145 countries and destinations worldwide—including all of Europe and all of South America.

The Un-carrier has steadily expanded the number of countries and destinations it covers, from 115 at launch in 2013 to 145 today. Now, Simple Global covers more than 90% of the trips Americans take abroad each year. The most notable addition in today’s list is the Bahamas, where over 2 million Americans travel each year, and now those travelers with T-Mobile won’t have to worry about expensive roaming charges or add-on plans.

Simple Global takes aim at the carriers’ practice of jacking up their customers’ rates as soon as they step across a border. Take a trip with Verizon’s International Travel Preferred Pricing, and you could pay a staggering $250 for just one gig of data, based on their published rate of $25 per 100 MB.  And that’s with an international add-on in qualified countries. If you’re unlucky enough to need to travel elsewhere or forget the add-on, they could hit you for $2.05 per megabyte—which works out to a mind-boggling $2099.20 for a single gigabyte of data.

“We’ve just made your traveling even easier in 20 more destinations around the world, expanding Simple Global to cover all of Europe and all of South America,” said John Legere, president and CEO of T-Mobile.  “The carriers have made billions overcharging consumers who just want to stay connected overseas, and we’ve changed all that!  Today, we made it even simpler to text, search or keep up on social media in a total of 145 countries and destinations, all at no extra cost!”

Simple Global has been, without a doubt, one of the Un-carrier’s most-loved moves.  Since 2013, T-Mobile customers are using 140 times more data abroad, global texting is up more than 10 fold and customers are making more than 6 times as many voice calls. Meanwhile, in a recent survey, over 50% of carrier customers say they turn their data off as soon as they leave the U.S.—mostly out of fear of the carriers’ insane roaming charges. And, to avoid those charges, the carriers make customers jump through hoops to tack on global roaming plans that jack up their monthly bill.

Nowhere is this problem worse than with American businesses, who − in the past − had no choice but pay the carriers’ exorbitant fees as a cost of doing business. In 2014, U.S. businesses paid their carriers an incredible $7.3 billion in wireless data charges for employees roaming abroad, according to RCR Wireless. Here’s what a week long business trip might look like on each of the 4 major wireless companies:

While Simple Global has you covered outside North America, T-Mobile’s historic “Mobile without Borders” delivers calling to both land lines and mobile phones − as well as 4G LTE data straight from your plan − across the US, plus Mexico and Canada at no extra cost.  This first-of-its-kind move made Simple Choice the first and only wireless plan to span an entire continent.

For a full list of all 145 Simple Global countries and destinations where T-Mobile customers enjoy unlimited data and texting and low flat-rate calling all at no extra charge, please visit t-mobile.com/cell-phone-plans/simple-choice-international-plan-countries.html. 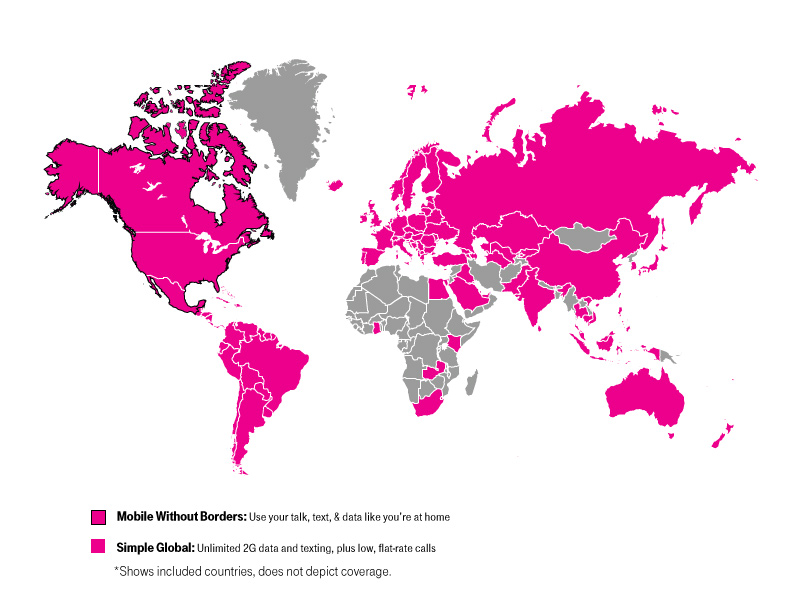 About T-Mobile US, Inc.:As America's Un-carrier, T-Mobile US, Inc. (NYSE: TMUS) is redefining the way consumers and businesses buy wireless services through leading product and service innovation. The Company's advanced nationwide 4G LTE network delivers outstanding wireless experiences for customers who are unwilling to compromise on quality and value. Based in Bellevue, Washington, T-Mobile US provides services through its subsidiaries and operates its flagship brands, T-Mobile and MetroPCS. It currently serves approximately 59 million wireless customers and provides products and services through approximately 70,000 total points of distribution. For more information, please visit https://www.t-mobile.com.