Back in early 2013, when I first launched the Un-carrier movement and announced real change was coming to U.S. wireless - most of the industry experts thought I was crazy, bluffing - or both. You know who you are.

Now, a lot of the same experts are asking what’s next in wireless. So I’m laying down a few 2015 predictions for the Un-carrier and for the industry. A few are no-brainers. Others are going to sound a little crazy … but what else is new?

1. The wireless revolution has not only been sparked, it’s become a movement – and it’s not slowing down, it’s speeding up....to warp speed.

I said we would change wireless for the better and we are.   Revolutionizing this industry has always been about truly reinventing it.  The other guys will keep trying to fake their way through – with their eye on their own bottom line – but we will keep shaking things up and forcing change.  Unfortunately, I don’t see any real behavior changes coming from the carriers in the year ahead and I’d be missing an opportunity to keep the pressure on them if I didn’t remind you of the pathetic efforts these guys have made to keep up with us so far.

So let’s break it down. Over the past 20 months - and eight industry-rocking Un-carrier moves later - we’ve built massive momentum and ignited this revolution. Millions and millions of Americans know T-Mobile is changing wireless for the better.

Already in 2014, analysts estimate that 41% of devices are purchased without subsidies. The Un-carrier started that in a major way. In 2015, two-thirds of devices will be sold without those confusing subsidies, and more than half of US wireless customers will be contract-free.

But, other changes won’t get traction. Overages will still be rampant. People will still have to turn off their phones when they land in a foreign country (unless they are a T-Mobile customer…). ETFs will still exist – and some carriers may make them even more onerous.

The chart below shows the weak response from the carriers to our Un-carrier moves and Simple Choice™ plan. While we’ve been changing the industry, they’ve spent the last three months throwing out a whole lot of gigabyte gimmicks. Unfortunately, the situation from the carriers won’t look much different at this time next year, but you can bet that we’ll have added more rows to the chart below by then. 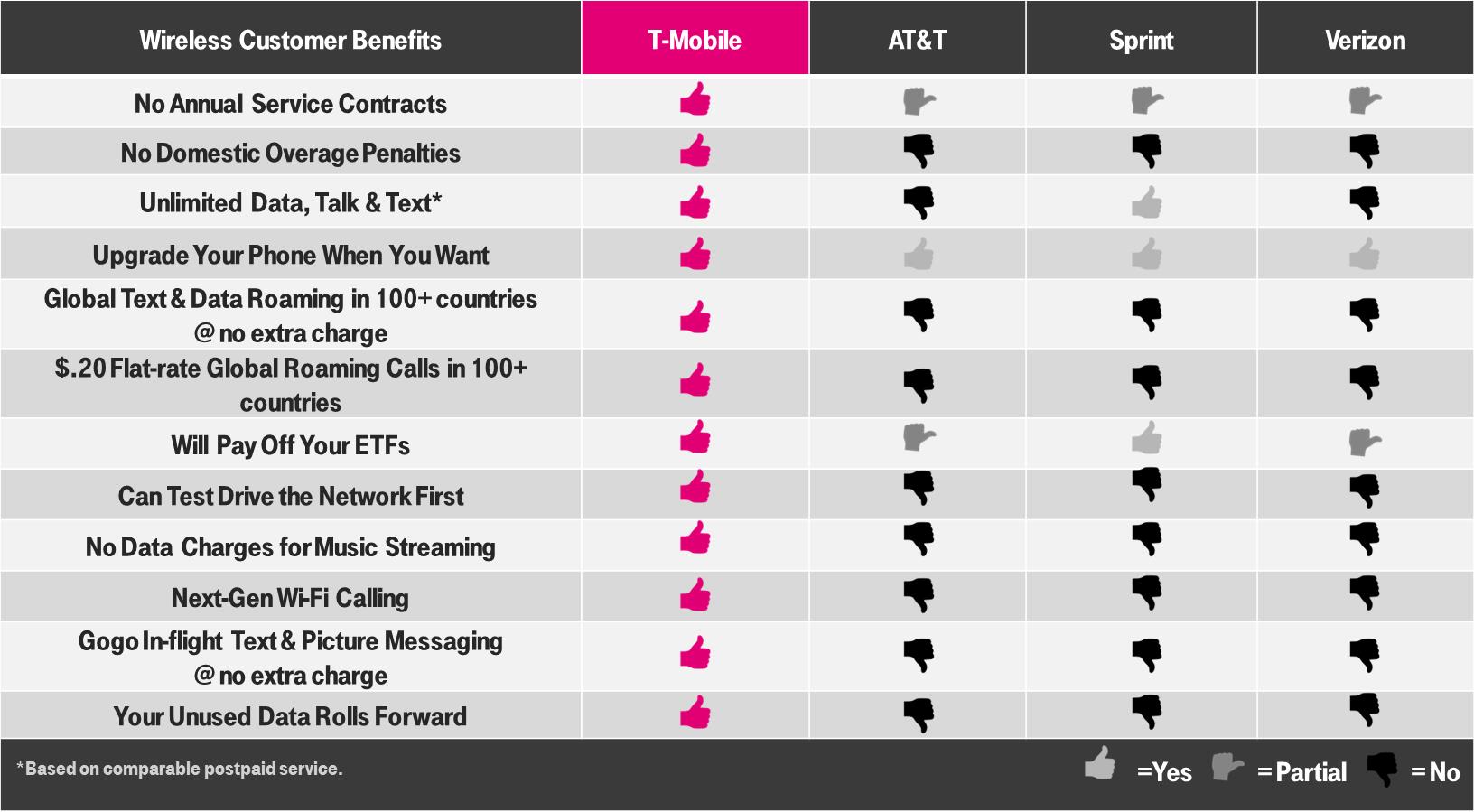 I love it when people share their network speed tests, and T-Mobile is just blazing fast.  But, I love it even more when people tell me where they have coverage gaps vs. the duopoly.

I love it because it means they’re comparing us to the big guys and expecting us to be competitive - this would have been unthinkable just two years ago. I love it because we catalog that feedback and use it to get better … and because I know what we have planned.

Today, we reach 264 million Americans with our LTE network. Verizon reaches 303 million. So, yeah, there are places we don’t reach yet. But, here’s the interesting part, where we do reach the same people our LTE network is the fastest nationwide.

And, this coming year, we’ll cover 300 million people with our blazing-fast LTE network – not to mention we plan on covering more than 150 metro areas with Wideband LTE and deploying 700 MHz spectrum in approximately 350 metro areas. So, what are they going to do when we reach everyone they reach with a faster network? Yeah, this is real, Verizon.

3. The competition will continue to bumble along.

Ok, I said some of these were obvious.

AT&T will find new ways to cause their customers pain - especially those still on grandfathered unlimited plans. Just to squeeze more money out of them. (Meanwhile, we’ll keep embracing unlimited.) I’m also betting AT&T will introduce a weak Data Stash™ knock off – but the fine print will be massive, and they’ll miss the first and most important step in the process – which is to stop punishing their customers with domestic overages and instead get rid of them. In fact, I predict that AT&T will collect more in overages in 2015 than anyone else.

Sprint will continue throwing out campaigns, offers and promotions – anything to see if it sticks. It’ll be confusing as hell. Somewhere mid-year, they’ll realize they can’t slash their way to growth and start to invest in their network and customer care. Oh, and they’ll have at least two more ad spots featuring animals – like the hamster or screaming goat. Since they like to recycle Internet memes, my money is on a honey-badger spot.

Verizon will keep trying to baffle American wireless customers with BS promos, like the one they did this year telling customers they could get a free iPhone 6 (don’t forget to read the small print!), as well as misleading advertising about everything from coverage maps to device trade-ins. You can bet we will continue to call them out on this BS “bait and switch” behavior. It’s just not fair for consumers. On top of that, I’m going to go out on a limb here and predict Verizon will take the title from AT&T for the shortest-lived promotion ever this year.  Desperate times!

4. Wearables and phablets will be the big device stories of 2015 (and maybe some connected cars!)

I love what Jawbone, Fitbit, Samsung, LG, Microsoft and others are doing in the wearables space. But we haven’t begun to see the potential of this category. It’s going to go from $1 to $20 billion in the next few years. And though we won’t see its full impact in 2015, I believe that the Apple Watch will mark the tipping point when wearables go from niche to mainstream.

5. I’ll be in conversation with nearly 2M Twitter followers (at the very least 1.5M...) by the end of the year.

Listening is the most important thing I do as CEO, and Twitter has been a huge boon, helping me stay in touch with nearly 900,000 followers today and stay on top of their questions and eliminate their pain points. I get my best ideas by listening to customers, and by the end of 2015, more than 2 million people will be part of this ongoing, open conversation - which you can join @JohnLegere.

I also predict Marcello is really going to get into social media – and stop just retweeting other people, but Randall and Lowell will stay in their executive suites, deaf to their customers.

Oh, and the creepy Legere Doll will have more followers than all carrier CEOs combined. That’s @LegereDoll. Yes really.

6. DC is going to be very busy on regulatory issues for the Wireless Industry.  Like it or not! Spectrum will continue to be the lifeblood of wireless and the Government will keep driving for balance across this industry -- and well beyond the duopolists.

The AWS auction will end, and the broadcast incentive auction should gear up for the New Year. However, I am sure that AT&T and Verizon will continue to try and monopolize the industry as well as try to stall the incentive auction, preventing competitive carriers like T-Mobile from winning sufficient amounts of low-band spectrum. The US Government will need to step in and ensure that companies like the Un-carrier can continue to fight the big guys by establishing balanced rules for this auction. Then we will be able to keep driving innovation in this industry!

I also believe that the net neutrality debate will shift from a war of words to the hard work of charting a real path forward.

There’s strong emotion on every side of the net neutrality issue. But we all agree on one thing:  a free and open Internet. In the coming year, I predict that DC and the industry will begin the incredibly hard work of figuring out how we achieve that goal.

7. MetroPCS will pull even further ahead of the prepaid pack.

The blistering pace of growth in 2014 - expanding from 15 to 45 metro areas - will lead to MetroPCS cementing its leadership position in the prepaid space in 2015. We’re already #1 in prepaid among the big national providers. And we are continuing to open new doors, add new handsets and offer new solutions to these customers.

MetroPCS is truly the unsung hero when it comes to the prepaid market. And I promise you this, we will continue to accelerate our efforts in this area. So, don’t take your eye off this business!

More than a prediction, this one is a promise.

We’ll make more Un-carrier moves and continue to improve and expand past moves. And, we’ll take the Un-carrier movement to entirely new groups of people.  For instance… Did you know like a quarter of the people in this country don’t yet have a smartphone, and a quarter of households don’t have Internet access? They need some Un-carrier attention! And there are countless small and mid-sized businesses out there we can help. There’s still a shit-ton of important work to do.

I also have a few resolutions I want you to help me keep. It wouldn’t be a New Year without some resolutions!

First, I’m going to keep listening to customers. Because that’s what started this whole thing. The Un-carrier movement is a true crowd-sourced revolution.

Second, I’m going to keep solving customers’ pain points. Because I can.

T-Mobile will - officially - become the No. 3 wireless company in America in 2015. This summer, I said we’d blow by Sprint by the end of 2014 to become the No. 3 wireless company in the US. They have been swinging the bat since I made that statement, so we won’t know where things stand until we get the final score after we both report Q4 earnings, but whether it is now – or soon – I’m telling you, it’s a done deal!