Our Un-carrier Manifesto, penned when we launched this movement three and a half years ago, closes with these words: “We are the Un-carrier. And we will be un-relenting.” Nowhere is that more true than with the Un-carrier network—and these past months have been no exception - we have been unrelenting in kicking ass. With outstanding progress like this, I have to stop every once in a while and just re-cap the massive work done to deliver the best network and fastest speeds to T-Mobile customers everywhere!

And on top of it all, I’m also proud to announce that T-Mobile’s 4G LTE network is still the fastest in America – now for the 11th straight quarter and counting. The very latest results—based on millions of real-world, crowdsourced customer speed tests—come from network measurement experts Ookla, the folks behind Speedtest.net. Want more proof? Results from both OpenSignal and the FCC rank T-Mobile’s network fastest, too. And new test results from Twin Prime, who released a report a couple of weeks ago, also confirmed that T-Mobile has the fastest network. See the pattern here?

But, beyond consistently showing our network is fastest, the crucial commonality across all these test results is that they are all based on crowdsourced data. We measure ourselves against the competition using crowd-sourced tests that show the speeds millions and millions of people are actually experiencing. That is how we know for a fact that T-Mobile still delivers the fastest 4G LTE network in America.

Why Crowdsourcing Works—and Is the Future

Crowd-sourced testing is the Un-carrier way to benchmark network speed. With smartphones everywhere and advanced analytics, network benchmarking has moved out of the car and into the future!

First, crowdsourced data represent REAL network experiences of MILLIONS of customers. The older staged tests use a small fraction of the sample size. We have ORDERS OF MAGNITUDE more data. #ThatsHowWeRoll

Second, the older staged tests simply cannot reach all the places you use your phone—like your living room or your office.

Third, those staged tests use ONE (!?!) single phone model. The crowdsourced data come from real customers using every device under the sun.

Finally, staged tests are heavily funded by the very companies they’re testing. If you knew a referee were being paid millions by one of the teams on the field, would you trust his or her calls?

Don’t get me wrong. Staged tests serve a special role. (I mean, other than being featured in a never-ending torrent of Verizon commercials.) The tests can tell us a lot about network performance on roads. So, for the long haul truckers, these tests are super helpful. For the rest of us, not so much.

The future of network measurement is crowdsourced testing. The results are impartial. The data are accurate, honest reflections of real-world customer experiences on the network.

The other guys focus exclusively on “download” speed results, because—until a few years ago—most of us simply consumed online content. But, today, we create content - we’re posting, snapping, Periscoping, skyping, saving to the cloud, and sharing more and more of our own pics, video and other content. Which means upload speeds are increasingly critical to a great network experience. In 2014, the average T-Mobile customer uploaded just 350 MB a month. In 2016, the average is more than DOUBLE that.

That’s why, over the last few years, we’ve been focused on faster upload speeds, too. No surprise, T-Mobile’s network upload speeds are also No.1 in the nation—and almost 50% faster than Verizon. And, when taken together, our download and upload speeds simply blow away everyone. 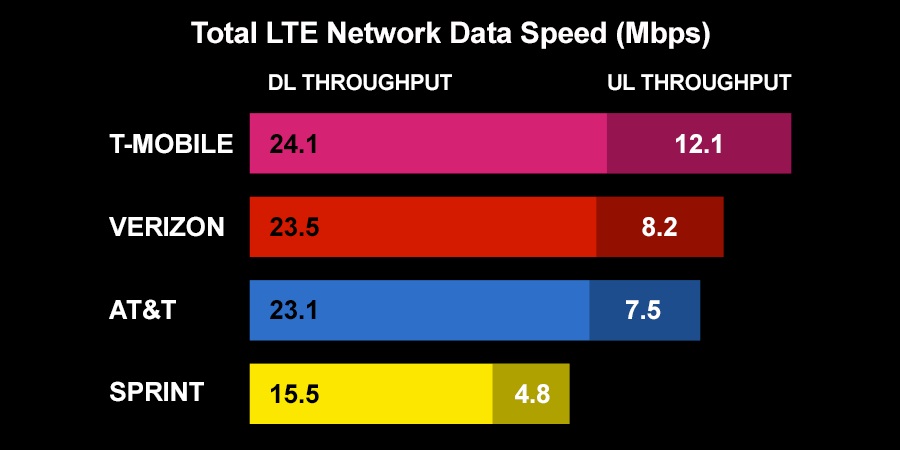 That’s also why Verizon’s current ad campaign makes me laugh. They’re spending hundreds of millions to TELL you that their network is now 50% faster than ever. Of course they don’t tell you that they’re still slower than T-Mobile—and almost 50% slower on uploads!

The coverage and speed advantages they once had are gone, and they know it. Now they’re trying to confuse consumers into thinking their network is more advanced somehow by calling it “next gen.” Seriously, Verizon? It sure isn’t 5G, the next generation shift in technology from 4G. They activated technology that T-Mobile has had for years, called it 50% faster, and they’re still getting their asses kicked. The only thing next gen is their level of BS.

And speaking of BS, look at that graphic – poor Sprint. They like to crow about their network being within 1% of the others. What a load of crap! Their LTE speeds are the slowest in the nation. T-Mobile upload speeds are a ridiculous 250% faster. Ouch, guys. And you’re still slashing your network capex?!? #priorities

That’s where we are today. T-Mobile’s network is fastest, fastest growing, and advancing faster than any other. The most advanced network performance tests in the world prove it. Again and again and again. And we’re not slowing down. We’re not stopping.

Because, hey, we’re the Un-carrier. And we are un-relenting.