T-Mobile will begin using 600 MHz spectrum later this year, well ahead of expectations

Bellevue, Washington — April 13, 2017 — Buckle up, carriers. It’s about to get real. T-Mobile (NASDAQ: TMUS) today just confirmed the Un-carrier’s jaw-dropping results from the recently concluded and successful 600 MHz FCC spectrum auction. The Un-carrier won 45% of all low-band spectrum sold, covering 100% of the US and Puerto Rico and enabling the Un-carrier to compete in every single corner of the country. T-Mobile walked away with a staggering 31 MHz nationwide on average, quadrupling the Un-carrier’s low-band holdings, for a total of $7.99 billion, the company’s largest investment ever. T-Mobile is also sharing plans to put that spectrum to use later this year in parts of the country, defying industry expectations.

John Legere, president and CEO of T-Mobile, released a video blog today discussing the historic results and what they mean for the next chapter of the Un-carrier.

“These auction results are a win for everyone, especially consumers, and generated BILLIONS for broadcasters and US taxpayers. Congratulations to the FCC!” said John Legere, president and CEO of T-Mobile. “This spectrum sets us up to bring the Un-carrier – and REAL competition – to wireless customers everywhere, many of whom have never had real choices in wireless. If the Duopoly thought things were rough before – well, just wait!”

“T-Mobile now has the largest swath of unused low-band spectrum in the country. That is a BFD for our customers!” added Legere. “Because T-Mobile customers will be able to speed on a brand-new, wide-open wireless freeway, while carrier customers have to crawl along on their clogged, congested low-band freeways.”

This additional low-band spectrum means the company will be able to expand its LTE network to compete in every corner of the country, strengthen existing LTE coverage and increase capacity to meet customers’ growing demand for mobile data. Low-band spectrum substantially improves in-building coverage and also travels greater distances than mid-band and high-band spectrum. 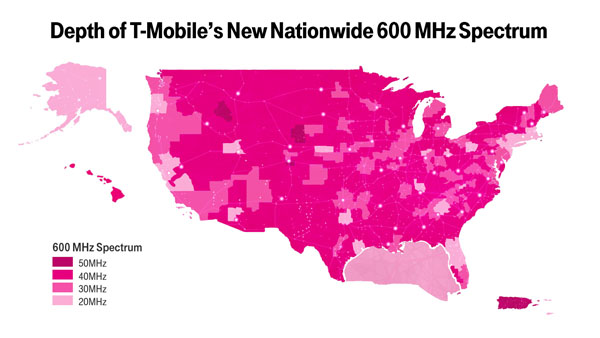 T-Mobile is also announcing they’ll put some of this new spectrum to use for both T-Mobile and MetroPCS customers this year, as a result of work started back in 2016. Already Ericsson and Nokia have announced availability of 600 MHz equipment that T-Mobile will use in its network, and the Un-carrier has 600 MHz licenses covering over one million square miles where T-Mobile expects at least 10 MHz to be clear this year – meaning T-Mobile’s network team can start working to light it up for customers.

“T-Mobile’s network is already the fastest, most advanced in the country, and this will take it to a whole new level – and we’ll do it FAST,” said Neville Ray, T-Mobile CTO. “Our team has a history of deploying network technologies at record-breaking pace – including the fastest recorded LTE deployment in US history. We’re ready to break records again on 600 MHz.”

* based on postpaid customers reported end of fiscal Q4 2016

This news release includes "forward-looking statements" within the meaning of the U.S. federal securities laws. Any statements made herein that are not statements of historical fact, including statements about T-Mobile US, Inc.'s plans, outlook, beliefs, opinions, projections, strategy, expected timing of spectrum use, nationwide 5G mobility, spectrum purchases, network modernization and other advancements, are forward-looking statements. Generally, forward-looking statements may be identified by words such as "anticipate," "expect," "suggests," "plan," "project," "believe," "intend," "estimates," "targets," "views," "may," "will," "forecast," and other similar expressions. The forward-looking statements speak only as of the date made, are based on current assumptions and expectations, and involve a number of risks and uncertainties. Important factors that could affect future results and cause those results to differ materially from those expressed in the forward-looking statements include, among others, the following: adverse economic or political conditions in the U.S. and international markets; competition in the wireless services market, including new competitors entering the industry as technologies converge; the effects any future merger or acquisition involving us, as well as the effects of mergers or acquisitions in the technology, media and telecommunications industry; challenges in implementing our business strategies or funding our wireless operations, including payment for additional spectrum or network upgrades; the possibility that we may be unable to renew our spectrum licenses on attractive terms or acquire new spectrum licenses at reasonable costs and terms; difficulties in managing growth in wireless data services, including network quality; material changes in available technology; the timing, scope and financial impact of our deployment of advanced network and business technologies; the impact on our networks and business from major technology equipment failures; breaches of our and/or our third party vendors' networks, information technology and data security; natural disasters, terrorist attacks or similar incidents; existing or future litigation; any changes in the regulatory environments in which we operate, including any increase in restrictions on the ability to operate our networks; any disruption or failure of our third parties' or key suppliers' provisioning of products or services; material adverse changes in labor matters, including labor campaigns, negotiations or additional organizing activity, and any resulting financial, operational and/or reputational impact; the ability to make payments on our debt or to repay our existing indebtedness when due; adverse change in the ratings of our debt securities or adverse conditions in the credit markets; changes in accounting assumptions that regulatory agencies, including the Securities and Exchange Commission ("SEC"), may require, which could result in an impact on earnings; and changes in tax laws, regulations and existing standards and the resolution of disputes with any taxing jurisdictions; and other risks described in our filings with the SEC, including those described in our most recently filed Annual Report on Form 10-K. You should not place undue reliance on these forward-looking statements.