to Sprint customers who make the switch to MetroPCS

Bellevue, Washington — January 20, 2016 — Sprint’s ‘Biggest Deal in US Wireless History’ just got served. Today, MetroPCS took the wraps off ‘The Biggest Offer in Sprint’s History’ – a lighthearted poke at Sprint’s underwhelming ‘Biggest Deal in US Wireless History’ that turned out to be just a promo filled with gotchas. Beginning tomorrow for a limited time, Sprint customers can switch to MetroPCS and save up to 50% off Sprint’s current Family Share Pack pricing – and they’ll keep that low pricing even after this deal is no longer available. Plus, they can also walk away with up to five free LTE smartphones.

“For anyone who’s been stuck or is regretting a recent switch to Sprint, this is a lifeline. You can now get a bigger and faster network– based on hundreds of thousands of crowdsourced tests – for up to half the cost. Oh, and we’re throwing in a free, new LTE smartphone on top. What’s not to love?” said Tom Keys, president of MetroPCS.

All you have to do is switch any current Sprint, Virgin Mobile or Boost number to MetroPCS to save anywhere from 22% to 50% off Sprint’s current Family Share Pack pricing when switching one or two lines. A customer switching one line of Unlimited LTE service would save 22% over Sprint’s current pricing, while a customer with two lines with 2GB of LTE data would save 50%. You’ll get the same unlimited talk and text and LTE data amounts – plus MetroPCS benefits like Data Maximizer as well as Mobile Hotspot included at no extra charge. 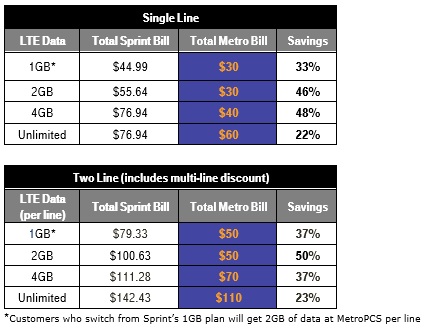 Savings may vary by location, given differences in local taxes and fees, and the number of lines you switch. Estimated Sprint prices in this chart include an average of 10% in taxes and fees on single line plans and 11.25% on two line plans. MetroPCS prices always include taxes and fees – so what you see is what you pay.

Starting today, customers who switch their number from Sprint can get a free 4G LTE smartphone from Samsung, LG or Kyocera up to a $50 value for every single line they switch, or any new lines they add. When you add more than two lines, you’ll get a mail in rebate as opposed to an instant rebate. Here are some of the devices you can walk out the door with:

Or, use your $50 rebate on any phone MetroPCS sells. It’s up to you!

It’s no mystery why an average of nearly 5,000 customers per day joined MetroPCS from the Sprint network over the last quarter. They’re coming for a bigger, faster LTE network. They’re coming for plans with big savings and one low price − taxes & fees included. They’re coming for built-in benefits like Data Maximizer and Mobile Hotspot that you don’t have to pay extra for every month. And they’re coming for extras like North America Unlimited so your plan works the same in Mexico and Canada as it does at home in the US and Music Unlimited so you can stream all the music you want from more than 40 music streaming services without using up your high-speed data.

In true Un-carrier fashion, current MetroPCS customers can also get in on the savings action. For a limited time, any MetroPCS customer on a $50 or $60 plan can add a line to their existing plan and that extra line gets 5GB of LTE data for just $30 a month, a 40% savings over the regular cost of $50.

These deals are available in participating MetroPCS stores nationwide starting Thursday, January 21 for a limited time. Customers who are interested in learning more can go to www.metropcs.com/breakupwithsprint.

About T-Mobile US, Inc.
As America's Un-carrier, T-Mobile US, Inc. (NASDAQ: TMUS) is redefining the way consumers and businesses buy wireless services through leading product and service innovation. The Company's advanced nationwide 4G LTE network delivers outstanding wireless experiences to more than 63 million customers who are unwilling to compromise on quality and value. Based in Bellevue, Washington, T-Mobile US provides services through its subsidiaries and operates its flagship brands, T-Mobile and MetroPCS. For more information, please visit https://www.t-mobile.com.