This week, the 2014 FIFA World Cup kicks off in Brazil, and we’re helping to bring this awesome global spectacle to your living room – and your phone – in typical Un-carrier style.

The World Cup is an amazing, incredible quadrennial event, and T-Mobile’s Simple Choice plan is hands-down the best option for the hundreds of thousands of Americans travelling to the games – with unlimited data and texting and low-cost calls while in Brazil.

This is the single largest sporting event in the world, and we pride ourselves on our connection to our customers, especially our Hispanic American customers, many of whom have a fanatic love of “Jogo Bonito” (the “beautiful game”).

T-Mobile has been a trailblazer in bringing Hispanic Americans closer to all the things they love – from bringing friends and family in the U.S. and throughout Latin America closer together – to experiencing the sports, music and cultural moments that make for such a rich and dynamic community.

And, the World Cup is no exception.

Bringing You the World Cup

All T-Mobile customers can get the game’s most exciting moments on TMO TV. On game days, fans will be served up mini feature videos “Goal of the Day,” “Save of the Day,” “Team Spirit of the Day,” and more so they can stay-up-to-speed on all the game-changing plays.

And, we’re excited to debut some fun, new TV spots focused on soccer madness, including our first-ever English-language spot with Shakira. The spot highlights the crazy restrictions of old-guard wireless carriers – and what might happen if soccer had similarly outrageous rules.

We’re also bringing you the matches from Brazil as a broadcast sponsor with Univision and Fútbol de Primera. And, we’re airing our GOAL! commercial spot on ESPN, as well as participating in the 24-hour lead-up to the big day and special preview show, “Countdown to Brazil” on ESPN.

Finally, last week, we kicked off “El Gran Pase,” an epic global pass around the world. Fellow fútbol fans can be part of this worldwide movement by submitting a video with the hashtag #GranPase, showcasing their best kick of the soccer ball and be included in the longest pass in the world, alongside soccer fanatics like Jorge “Soccer Machine” Perez, T-Mobile CEO John Legere, and none other than global superstar Shakira herself.

Why are we doing all this? 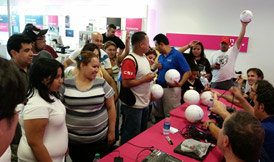 We have a deep commitment to this community – stretching back to when we launched one of the first dedicated calling plans to Mexico, to today, when we do business bilingually in our stores, online, on the phone, and on our Latino Facebook, Twitter and Vine pages. Our company is heavily Hispanic – nearly 30% of employees and 25% of customers are Hispanic, so we understand and connect deeply with this community.

And, T-Mobile is perfect for the way Hispanic Americans use wireless. Independent third-party studies show that Hispanic Americans use mobile internet more than non-Hispanics, download more pictures and more full track music, and spend 28% more time watching videos on their phones. So, the Un-carrier and our lightning fast network are a great fit.

Additionally, we sponsor great events like Premio Lo Nuestro and Premios Juventud, and we jumped in as the debut sponsor of the first Hispanic band featured on Pandora Premieres.

We even recently partnered with Univision and created an entirely new brand, built from the ground up for Hispanic Americans, called Univision Mobile, with service provided by T-Mobile.