It’s Opening Day at T-Mobile Park! The Un-carrier will host Macklemore for an epic pre-game performance in the T-Mobile ‘Pen and unleash tons of new fan perks, for today and every game day.

This marks the beginning of a 25-year partnership between T-Mobile and the Seattle Mariners, as the Un-carrier invests even more deeply in its hometown to bring fans an unmatched ballpark experience.

Mariners fans. And ALL the fans visiting our hometown T-Mobile Park.

Bellevue, Washington — March 28, 2019 —  It’s Opening Day! That means T-Mobile (NASDAQ: TMUS) and the Seattle Mariners are cutting ribbon on the newly minted T-Mobile Park this afternoon at 1:00 pm PT. The Un-carrier is going all-in for the best fans in MLB by offering an unmatched ballpark experience right in its own backyard, starting with an unforgettable pre-game performance by homegrown icon, Macklemore! Other fan perks include a brand new cocktail, high-speed charging stations, awesome surprises and more – plus, extras just for T-Mobile customers, like a dedicated fast track entrance, an enhanced network experience and surprise giveaways.

“For us, this is about so much more than a new name – it’s about showing our hometown love and giving all fans an unbeatable experience, every time they come to T-Mobile Park,” said John Legere, CEO of T-Mobile. “And we can’t wait to kick off a new era of Mariners baseball with an iconic lineup of Seattle favorites for fans today – Macklemore, Mike McCready and Edgar Martinez! All the ‘M’s’ for the M’s!”

Yep, T-Mobile Park is hosting a bevy of local favorites to kick off the season, starting with a pre-game performance by Macklemore in the T-Mobile ‘Pen today at 3:30 pm PT! Get there early, as space is limited to the first 2,000 fans. Then, stay tuned for Pearl Jam guitarist Mike McCready who’ll perform the National Anthem, and Hall of Famer Edgar Martinez throwing the first pitch to usher in an epic new season for Mariners fans.

Of course, the Un-carrier perks will keep percolating well beyond Opening Day! For one, the T-Mobile ‘Pen serves up some of the best views in the park – so naturally, it opens up 2.5 hours before game time so fans can scope out batting practice and pitcher warm-ups. And on select game days, surprise giveaways and a DJ will crank energy in the T-Mobile ‘Pen to an all-time high. The T-Mobile ‘Pen is also home to the new Magenta Mojo cocktail – a disruptively light and refreshing beverage crafted by 2019 James Beard Award Semifinalist Anu Apte to celebrate a new era of Mariners baseball. Available for $12.50 in the T-Mobile ‘Pen, as well as Terrace Club Lounges and Lookout Landing, fans ready to turn it up to 11 can even get the bubbly beverage with a souvenir take-home light up magenta ice cube for $15.50!

Plus, to keep fans connected and fully charged, T-Mobile has installed 19 high-speed charging areas throughout the park, including lockers, so there’s no need to stay tethered to the phone -- just drop it off and come back when ready.

T-Mobile thanks customers every Tuesday with freebies and deals…and now in partnership with the Mariners, the Un-carrier is bringing it to the park and extending it to ALL fans! During Tuesday home games this season:

Un-carrier customers are especially in luck, because they’re scoring their very own fast track entrance right into the T-Mobile ‘Pen – they just need to show their T-Mobile phone and they’re in! And to ensure they can keep those pics posting and those tweets tweeting, T-Mobile permanently increased capacity in the park by THREE TIMES and boosted its deployment of LTE-Advanced technologies. And you never know when the Un-carrier might surprise its customers with a game-day giveaway, just because…

Over the next 25 years, T-Mobile will bring innovative tech experiences to the park, starting with the T-Mobile Tech Experience and Future of Wireless Truck on Opening Day. Right inside the center field gates, fans will have a chance to hit a ‘5G home run’ at a batting simulator and learn how the next generation of wireless tech will improve gaming, sports and more. Or they can head down the road to The Hot Corner (next to Henry’s Tavern) to snag special augmented reality cards from T-Mobile team members, free grub, prizes and more! It’s almost too good to be true.

For a more detailed look at the new sights fans can expect at T-Mobile Park check out the video from Des below, alongside images from the ballpark. 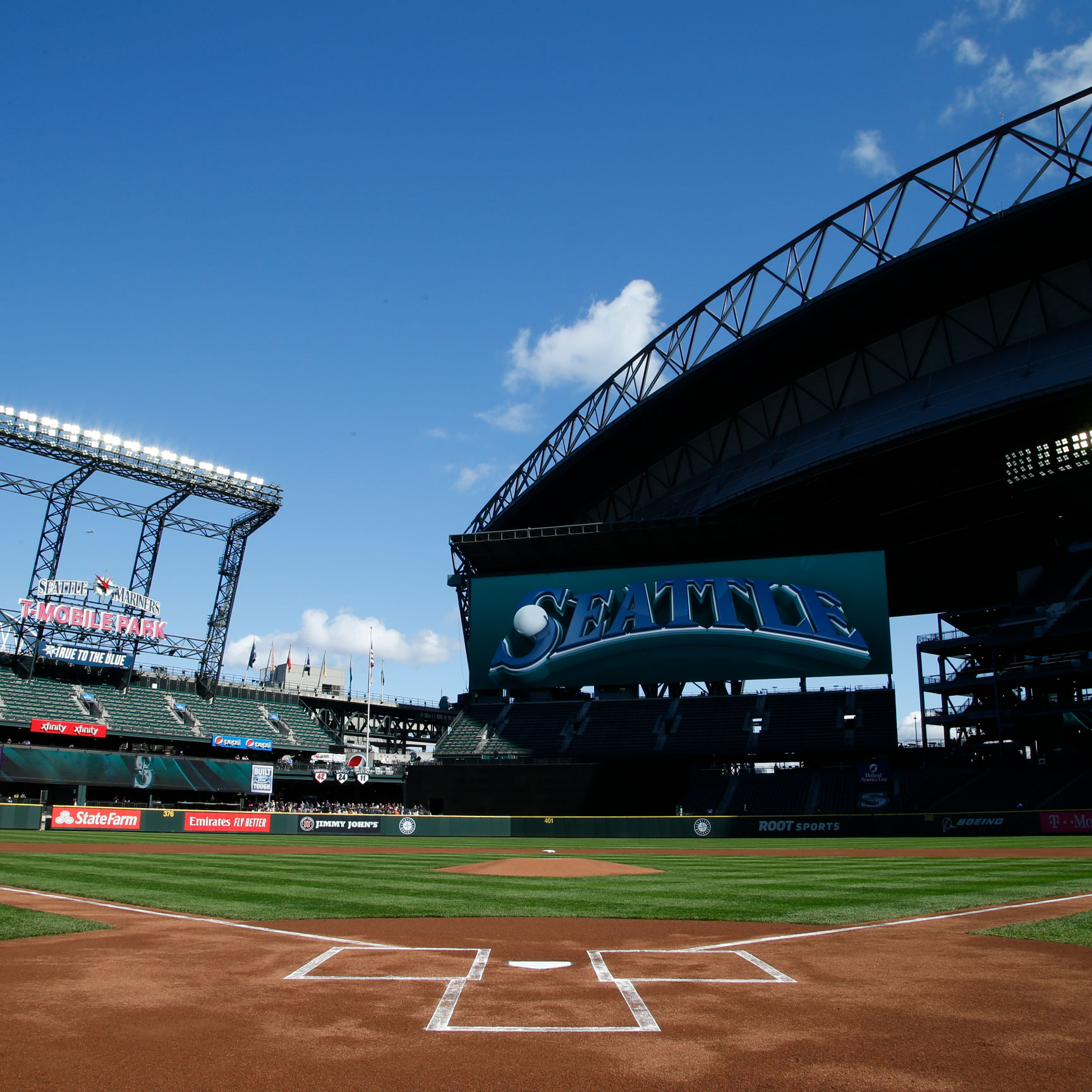 Limited time offer; subject to change. 99% based on coverage of U.S. population. Qualified plan required for T-Mobile Tuesdays. MLB.TV: Must be connected to T-Mobile’s network to sign up; redemption not available over Wi-Fi or while roaming. New 2019 subscribers only; current subscribers must cancel by 8:00 p.m. ET on March 22, 2019, to be eligible. Sweepstakes: NO PURCHASE NECESSARY. Open to residents of 50 U.S., PR & DC. For full rules visit t-mobiletuesdays.com. Void where prohibited. Shell: Claim by 3/20/19 at 4:59 a.m. ET. Free Shell Fuel Rewards App & account required. Must use discount by 3/22/19 at 11:59 pm ET. Fuel Rewards terms apply. Taco: Avail. for pickup only at participating U.S. Taco Bell locations while supplies last.

About T-Mobile US, Inc.
As America's Un-carrier, T-Mobile US, Inc. (NASDAQ: TMUS) is redefining the way consumers and businesses buy wireless services through leading product and service innovation. Our advanced nationwide 4G LTE network delivers outstanding wireless experiences to 79.7 million customers who are unwilling to compromise on quality and value. Based in Bellevue, Washington, T-Mobile US provides services through its subsidiaries and operates its flagship brands, T-Mobile and Metro by T-Mobile. For more information, please visit http://www.t-mobile.com.

About Major League Baseball
Major League Baseball (MLB) is the most historic professional sports league in the United States and consists of 30 member clubs in the U.S. and Canada, representing the highest level of professional baseball. Major League Baseball is the best-attended sport in North America, and since 2004, MLB has enjoyed its best-attended seasons in the history of the game. Led by Commissioner Robert D. Manfred, Jr., MLB currently features record levels of labor peace, competitive balance and industry revenues, as well as the most comprehensive drug-testing program in American professional sports. MLB remains committed to making an impact in the communities of the U.S., Canada and throughout the world, perpetuating the sport’s larger role in society and permeating every facet of baseball’s business, marketing and community relations endeavors. With the continued success of MLB Network and MLB digital platforms, MLB continues to find innovative ways for its fans to enjoy America’s National Pastime and a truly global game. For more information on Major League Baseball, visit www.MLB.com.