420 is no laughing matter… but it is kind of funny, and fitting, that Verizon scheduled its earnings call on the holiest of high days, no? After all, this is the same company that’s made questionable decisions one after the other for the past four years and now finds itself losing customers to T-Mobile on a regular basis. There’s really only one explanation… Verizon has been #VerHIGHzon this whole time.

Throughout the day, we’ll update this page with a series of memes and content trying to make sense of #VerHIGHzon. The key takeaway from today? Do not get #VerHIGHzon on 4/20 or any other day for that matter. The results are not good. 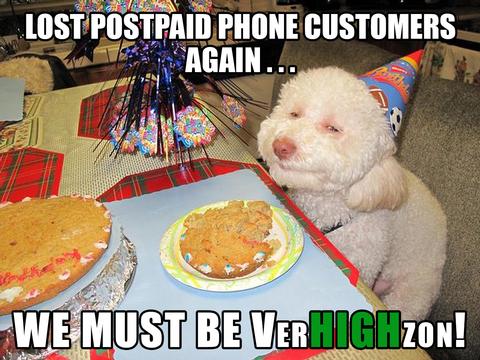 With Verizon’s earnings now out, the once dominating carrier has now lost postpaid phone customers in three of the past five quarters. #VerHIGHzon

This is our vote for the parlor game, “What’s the Most Hilarious Verizon Flip-Flop of All-Time”. Verizon said it was impossible to make money in unlimited in September 2016. Less than five months later they introduce an unlimited plan. Yet with another postpaid phone customer loss, not even an unlimited plan can turn around Verizon’s fortunes. #VerHIGHzon

The countdown is on. Our customers love the transparency, simplicity and consistency of getting charged the same amount every month. And the same amount we advertise, no less! How long will it take for Verizon to join us? Frame of reference… it took Verizon 1,260 days to follow our lead and end overages, 569 days for data rollover and they still haven’t copied us on free international data roaming. #VerHIGHzon

Verizon legit thought it could charge customers $5 per month to “protect” those customers from Verizon overages. They called it Safety Mode. We call it Mafia Shakedown Mode. #VerHIGHzon

Verizon at one point had a legitimate network advantage. Today, that advantage is more-or-less gone. And with the conclusion of the recent spectrum auction, and Verizon failing to win a single license, it’s only a matter of time before the Un-carrier is the unquestioned network leader. #VerHIGHzon

You’ve got to give it to Verizon, they do have lofty ambitions. Their sights are set on two of the biggest, most disruptive technology forces in the world in Facebook and Google. Spending nearly $10 billion on two icons of a bygone era, though? #VerHIGHzon

When your new brand name is repeatedly compared to Tronc, you’re clearly #VerHIGHzon

As of the end of Q4 2016 in December, more customers came to T-Mobile from each of the national carriers than vice versa for THREE STRAIGHT YEARS. One more week til we know if we’ve extended the streak another quarter! #VerHIGHzon

With the conclusion of the recent low-band spectrum auction, T-Mobile now has nearly triple the lowband spectrum per customer than Verizon. #VerHIGHzon

A few quotes and headlines from the media about Verizon’s Go90 experiment. Ouch. #VerHIGHzon.

The Cleveland Plain-Dealer ran a 20+ part series on Verizon grossly overcharging its customers that started in Sept 2016 and continued over a six month span. The series spawned an FCC investigation and uncovered thousands of customers that received phantom data charges. #VerHIGHzon

T-Mobile put an end to the device subsidy model in March 2013. One year later, Verizon says device subsidies is a “good model”. 17 months later, after losing customers to T-Mobile on the regular, Verizon FINALLY gets the message and kills off subsidy plans. That’s 870 days. #VerHIGHzon 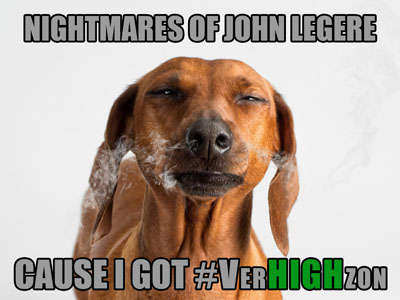 This is pure speculation on our part. But if the roles were reversed, and we continued to lose customers hand-over-fist, saw our network metrics trending downward, spent billions on failing bets and in general had no hope for the future, we’d probably have nightmares of the person doing the damage. #VerHIGHzon