What’s the news: It's official — T-Mobile's 5G network is live in Lisbon, North Dakota.
Why it matters: 5G has been all the talk in wireless and now it’s a reality in Lisbon. Faster speeds in the near-term and significant economic opportunities down the road.
Who it’s for: Technology enthusiasts, business owners, farmers, first responders, innovators, early adopters… really, anyone who needs or wants faster data speeds and better connectivity.

LISBON, North Dakota— August 4, 2020 — Look! Up in the sky, it's a bird, it's a plane … it's 5G? With nearly 300 drones and magenta-inspired visual flair, T-Mobile (NASDAQ: TMUS) announced the company is delivering its nationwide 5G signal to Lisbon. Residents and businesses in the area with 5G-capable smartphones on T-Mobile's network can now get faster data speeds than before, especially indoors.

"It's exciting to put Lisbon's name on the map for 5G, thanks to T-Mobile, and to do it in such a stunning way over the skies of Ransom County," said Lisbon Mayor Tim Meyer. "There is so much potential in the next-generation of wireless technology, and 5G will create opportunities for innovation and economic benefit not only in our community, but across the state. 5G is another great reason Lisbon is 'a place to call home.'"

To celebrate the arrival of 5G locally, on Sunday evening, T-Mobile lit the night sky in west Lisbon using nearly 300 drones with brilliant LED lights to skillfully craft brief messages to local residents announcing the availability of its 5G network in the area. The light show, which lasted approximately 15 minutes, could be seen by residents in attendance at Sheyenne Speedway as well as within the entirety of the Lisbon city limits. T-Mobile plans to use footage captured from the drone light show in a national campaign it launches today, highlighting the Un-carrier's expansion of 5G into even more rural communities nationwide.

The very heart of wireless service is based on spectrum — invisible highways in the air that transport voice and data from a phone to a cell site. This nationwide 5G rollout from T-Mobile, and the network in Lisbon, is based on the operator's 600 MHz spectrum, also referred to as low-band. It provides the foundational layer for T-Mobile’s 5G network. Download speeds on T-Mobile’s 5G on 600 MHz will be around 1.5 times faster than LTE on average and that experience will improve exponentially over time, just like with 4G.

In the coming months and years, T-Mobile will build upon this foundational nationwide 5G layer with mid-band spectrum acquired as part of the Sprint merger earlier this year, and high-band spectrum that will add capacity — or more “lanes” using the invisible highway analogy — for greater speeds and better coverage. This combination of spectrum assets will deliver a 5G network with both breadth and depth, something Verizon and AT&T simply cannot do as quickly. The stakes are high for the U.S. as billions in economic growth and jobs are expected to come from 5G and the innovations it will unleash. 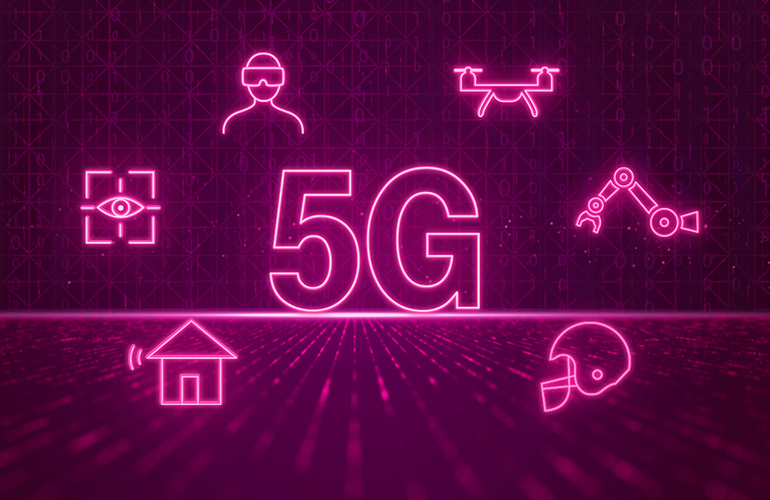 "It's exciting to put Lisbon's name on the map for 5G, thanks to T-Mobile, and to do it in such a stunning way over the skies of Ransom County. There is so much potential in the next-generation of wireless technology, and 5G will create opportunities for innovation and economic benefit not only in our community, but across the state. 5G is another great reason Lisbon is 'a place to call home.'"

T-Mobile launched its LTE service in Lisbon in the fall of 2015, and since then, has continued to deploy new spectrum to provide more — and better — wireless coverage for local residents. Today, Lisbon becomes one of the first markets in the U.S., and the world, to be upgraded to a Standalone (SA) 5G network, which provides users with increased capacity and a better network experience. Over the past five years, T-Mobile's network in North Dakota has grown to cover even more people and seen an increase in network speeds — imagine the benefits to North Dakotans customers in the next five years!

Coverage not available in some areas. While 5G access won’t require a certain plan or feature, some uses/services might. See Coverage details, Terms & Conditions, and Open Internet information for network management details at T-Mobile.com.

About T-Mobile US, Inc.
T-Mobile U.S. Inc. (NASDAQ: TMUS) is America’s supercharged Un-carrier, delivering an advanced 4G LTE and transformative nationwide 5G network that will offer reliable connectivity for all. T-Mobile’s customers benefit from its unmatched combination of value and quality, unwavering obsession with offering them the best possible service experience and undisputable drive for disruption that creates competition and innovation in wireless and beyond. Based in Bellevue, Wash., T-Mobile provides services through its subsidiaries and operates its flagship brands, T-Mobile, Metro by T-Mobile and Sprint. For more information please visit: https://www.t-mobile.com.