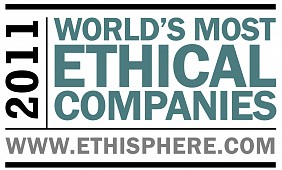 T-Mobile USA, Inc. was today recognized by the Ethisphere Institute as one of the 2011 World’s Most Ethical Companies, which marks the third consecutive year that T-Mobile has received this distinction. Out of a record number of nominations for the award, T-Mobile secured a hard-earned spot on the list by continuing to implement ethical business practices and initiatives that are instrumental to the company’s success, while benefitting the community and raising the standard for the industry. T-Mobile was also the only U.S. wireless telecommunication service provider listed this year.

“We are honored to have been named to Ethisphere’s 2011 World’s Most Ethical Companies list,” said Philipp Humm, CEO and president, T-Mobile USA. “This is a testament to our employees, who embrace our company values. It’s also recognition, on a global scale, of the company’s focus on social, environmental, workplace and business ethics issues. We are proud of this award because it sets us apart from our competitors as an industry leader and an employer of choice.”

Ethisphere reviewed thousands of companies and evaluated a record number of applications utilizing its proprietary methodology through in-depth research and multistep analysis, naming 110 companies that surpassed their industry peers to this year’s World’s Most Ethical Companies list. The 2011 list features companies in 38 industries, including 43 companies headquartered outside the United States.

“As companies strive to maintain a competitive advantage, good ethics translate into better business, and better business means better bottom lines. T-Mobile USA recognizes the important role that principled practices play in brand reputation, which ultimately is the most valuable asset for a corporation,” said Alex Brigham, executive director of the Ethisphere Institute. “Each year, the competition gets more intense for the World’s Most Ethical Companies, and this year was no exception with a record number of organizations vying for this distinguished honor. Ethisphere congratulates T-Mobile on being one of the 2011 World’s Most Ethical Companies.”

Read about the methodology and view the complete list of the 2011 World’s Most Ethical Companies at http://ethisphere.com/2011-worlds-most-ethical-companies.