Here comes the 5G era—and the impact on businesses will be huge.

Planning for a world with 5G.

A new standard is on the rise.

The arrival of the 5G era is generating lots of buzz—and with good reason. The next generation of wireless communication represents an opportunity for enterprises to revamp the way they provide connections to all kinds of users.

This is a big deal. Mobile connectivity and the enablement of a remote workforce have never been more crucial for business success. The emergence of advanced mobile networks means companies are shifting from a wireless world that is still tethered in many ways to one in which true mobility dominates.

Among the key areas where 5G might have an impact on enterprise networking are Multiprotocol Label Switching (MPLS) and distributed antenna systems (DAS). IT leaders are already showing interest in the idea that 5G-powered Wi-Fi or software-defined wide-area networks (SD-WANs) could be viable replacements for MPLS and DAS.

MPLS, a component of packet-switched networking, is a routing technique that directs data from one node to another based on short path labels rather than on long network addresses. This eliminates the need for complex lookups in routing tables and speeds up network traffic. The labels identify virtual links between distant nodes rather than endpoints. MPLS is scalable and protocol-independent.

DAS is a network of spatially separated antenna nodes connected to a common source via a transport medium that provides wireless service within a geographic area. A distributed antenna system is implemented indoors or outdoors. By splitting the transmitted power among several dispersed antennas, coverage is provided over the same area as with a single antenna radiating at higher power, but with reduced total power and greater reliability.

SD-WANs simplify the management and operation of WANs by decoupling networking hardware from its control mechanism. They allow enterprises to create higher-performance WANs using lower-cost, commercially available Internet access, which lets them replace more costly private WAN technologies such as MPLS. SD-WANs are provided by either physical or virtual appliances and can be deployed in remote offices, data centers, or on cloud platforms.

While some businesses might not be keen on the idea of swapping out an existing MPLS infrastructure that serves several remote locations or even global operations, the idea of upgrading this technology with an SD-WAN powered by 5G is certainly intriguing.

The potential of low latency, higher bandwidth, cost reduction, and other benefits has many IT and networking executives excited about the potential of 5G-based technology as a true wireline replacement.

For example, one IT executive at a manufacturing company says he would consider replacing a large portion of his current network with 5G technology if there were significant cost optimization opportunities, citing the high costs associated with the MPLS circuits currently being used.

Among the advantages of 5G for organizations is enhanced connectivity. For instance, a healthcare institution could leverage 5G technologies to more efficiently interconnect devices equipped with wireless sensors. It could then reimagine aging hospitals that are still using copper wire for communications, bypassing fiber to deliver a wireless experience for staff, patients, visitors, and others.

Solutions such as telemetry and wearable devices would be much easier to manage and use because of the low latency and high reliability and availability of networks made possible by 5G.

Planning for a world with 5G.

Clearly, many businesses are eager to enter a 5G world. Although we’re still in the infancy of 5G, many companies are already making plans to adopt the technology as a key component of their infrastructure.

A May 2019 study by Spiceworks, a marketplace that connects the IT industry to help technology buyers and sellers transact, shows that one in three companies plans to purchase new 5G devices as soon as they are available.

In a survey of 716 technology buyers in the United States and United Kingdom, the Spiceworks 2019 State of Corporate Connectivity report found that 32 percent of businesses have plans to buy new 5G-enabled devices after service becomes available in their area. 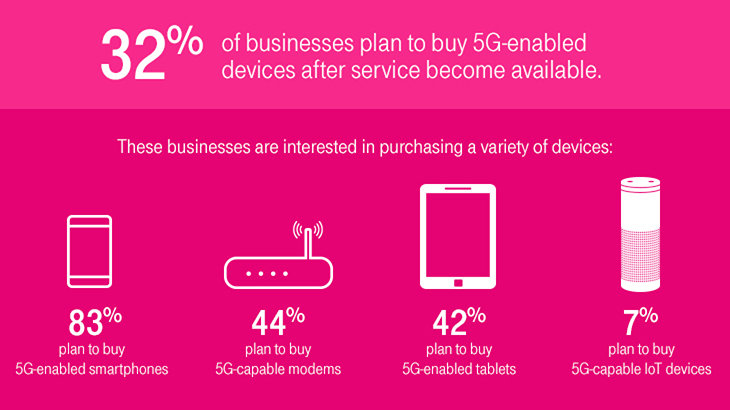 A new standard on the rise.

The promise of 5G is unmistakable.

With the arrival of innovative and potentially lucrative technologies such as IoT, edge computing, artificial intelligence, machine learning, virtual and augmented reality, and others—as well as the ongoing push toward remote and mobile computing—the need for high-quality, reliable communications has never been greater.

“5G is a potentially disruptive wireless networking technology that offers the promise of low-latency, high-bandwidth connectivity capable of speeds rivaling the fastest wired Internet connectivity options in use today.”

In many ways, the 5G era is arriving at just the right time. The key question for businesses is whether they will be ready.
Want even more trends, insights, and success stories?
Browse our Business Insights hub