You know how much I hate it when the carriers try to deceive consumers right? Well, I have something I need to hit head on today. The carriers spend billions to tell you the same old BS about our network. They’re trying to turn back the clock and want you believe nothing has changed with our coverage, when the exact opposite is true. A little over two years ago we had ZERO LTE. Today, we reach nearly every single American –and we’ve more than doubled the square miles we cover with LTE in just over a year.

On top of all that, we have been rolling out truckloads of new spectrum that carries our LTE signal twice as far from our towers, for a massive coverage expansion, and works four times better in buildings. We call it T-Mobile Extended Range LTE − also known as “Band 12” or “700MHz spectrum” − and we’ve been lighting it up at break-neck pace. It’s already live in 170 markets and covers more than half of all Americans. That means our total LTE network now reaches OVER 290 MILLION AMERICANS (in case you’ve lost count, that’s just about everyone…there are 320 million people in this country in total).

And, we won’t stop. T-Mobile’s network is not only the nation’s fastest LTE network – it is the nation’s fastest-growing LTE Network! In the next three months alone, we’re on track to cover another 600,000 square miles with LTE and reach 350+ markets with T-Mobile Extended Range LTE. We are expanding our coverage so fast that we cover an additional quarter million homes (260,000) every single week. Yes. Every. Single. Week.

If you haven’t tried our network lately, you seriously haven’t tried it. That’s because we’ve not only rolled out Extended Range LTE, but other frequencies as well – and Wideband LTE – to completely re-write the coverage map. Here’s what T-Mobile’s complete coverage is projected to look like as we wrap up 2015. Surprised? I thought so. 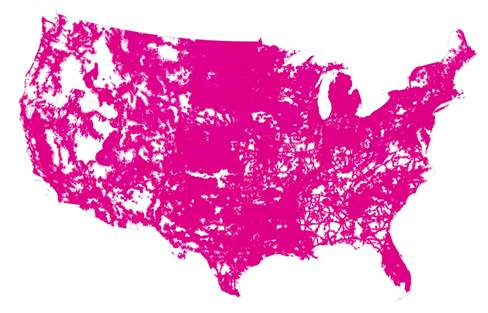