Congratulations to Kansas City, Sprint’s hometown football team on an incredible win! But the team wasn’t the only thing that heated up Miami!

Following more than a year of extensive network enhancements inside and outside of the stadium, as well as around the city of Miami, the Sprint network performed like a champ led by its MVP Massive MIMO technology and 2.5 GHz spectrum before, during and after the game at yesterday’s Big Game.

Here’s how our network scored on game day:

A TON of Data

When it comes to data usage, it’s not surprising to see the sheer number of people who were using their mobile devices to share their game-day experiences. Whether it was sending and uploading selfies or accessing real-time football stats inside the stadium or tailgating in the parking lot, Sprint customers used seven terabytes (TB) of data on game day. And, when factoring in all of the other event venues around the city over the super weekend, Sprint customers used an incredible 37 TB of mobile data. 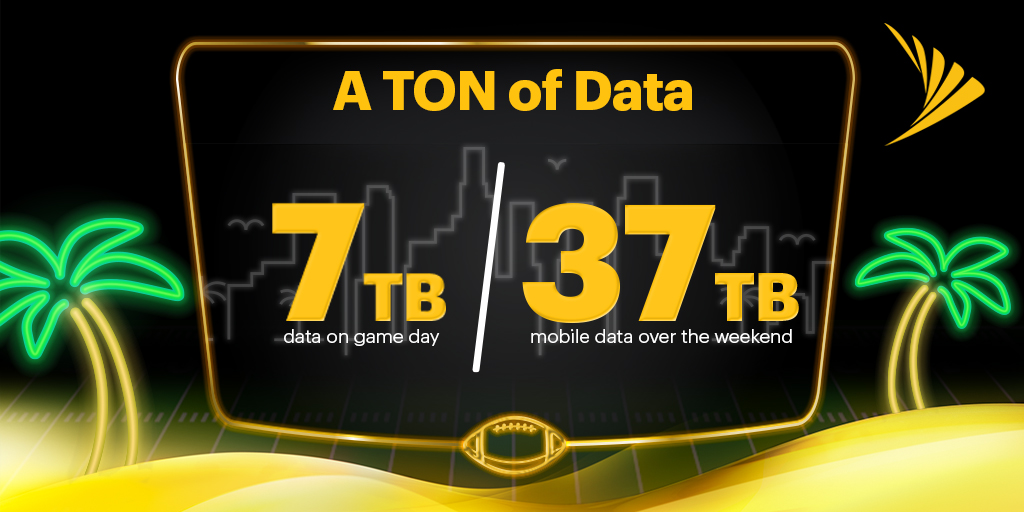 As hundreds of thousands of people descended upon the city for the big game and other related events, Sprint’s local network investment significantly boosted customers’ data speeds. Tests taken with Speedtest by Ookla at the stadium showed Sprint beating both AT&T and Verizon in average download speeds of 56.12 Mbps.[1]

Miami kicked off the first time football fans enjoyed 5G during the big game. And Sprint delivered, by lighting up Sprint True Mobile 5G in some areas of Miami, including the stadium! Ongoing speed tests performed by Sprint’s own network engineers throughout the game in the stadium clocked peak 5G speeds of over 360 Mbps. And according to Ookla, Sprint’s average 5G download speed was 225 Mbps.[2] 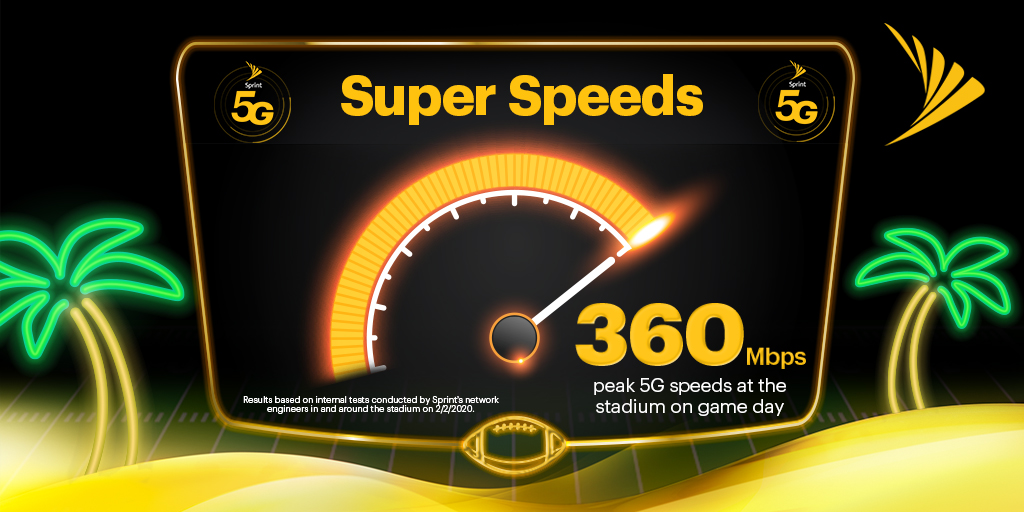 Attending the big game is such a memorable event that super fans want to get the most out of their devices. During the game, Sprint customers in and around the stadium were highly active. In fact, the biggest spike of data usage came in the fourth quarter, which shows just how exciting this game was right up until the end! 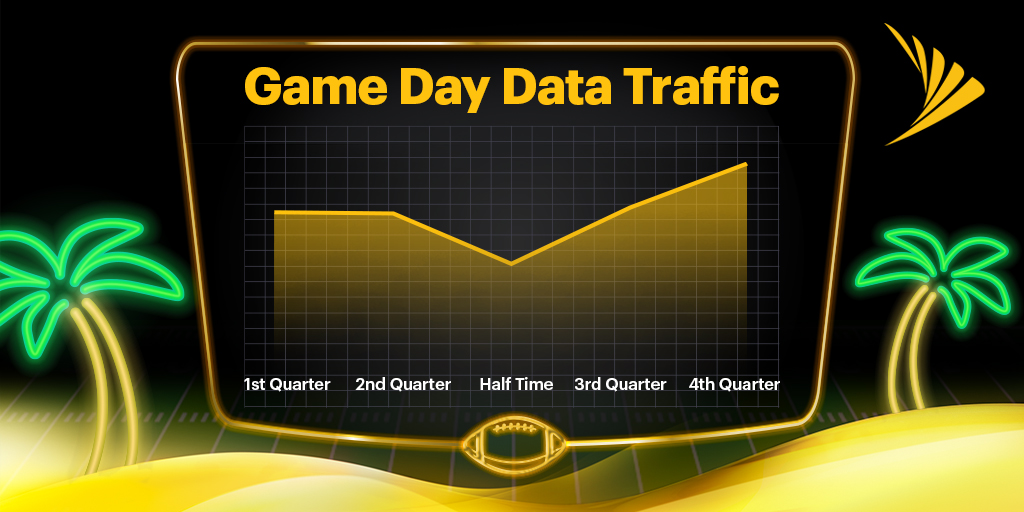 Football fans certainly love their hot dogs and wings. But based on their usage, they love these wireless apps just as much! Both YouTube and Instagram tied for the most popular apps used by Sprint customers at the stadium on game day. By category, the most used apps by Sprint customers while at the stadium were Video Streaming (37%), Social Media (35%), and Web Browsing (27%). 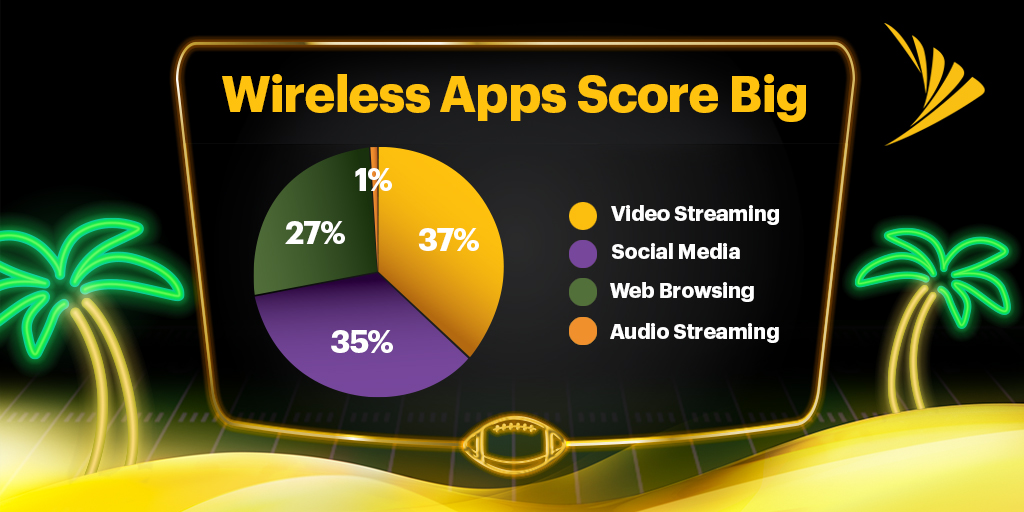 “Whether Sprint customers were watching the game from inside the stadium or at another location miles away, our goal was to give them a great wireless experience during one of the most anticipated sporting events of the year,” said Mike Hennigan, Sprint vice president for network, South Region. “In addition to installing a centralized RAN system at the stadium using Massive MIMO for LTE and 5G, we built new macro cell sites, upgraded existing sites, and added many more small cells to give residents and future visitors a faster, better and more reliable network than they had before.”

We’re ready for the celebratory parade in Kansas City to welcome home our gridiron heroes. And it’s never too early to start prepping the network for next year’s Big Game. So we’re already working hard on the other side of the state in Tampa ahead of 2021’s showdown. We’re looking forward to giving our customers another great wireless experience.

[1] Based on analysis by Ookla® of Speedtest Intelligence® data average download speed from 4G LTE results. Tests taken at the stadium during the 2020 Pro Football Championship. Providers included have 10+ device results and 100+ tests completed.

[2] Based on analysis by Ookla® of Speedtest Intelligence® data average download speed from 5G (beta) results. Tests taken at the stadium during the 2020 Pro Football Championship. Providers included have 10+ device results and 100+ tests completed.