The first full quarter of Ookla® data, based on the Speedtest® app, since Verizon brought back unlimited data is here. T-Mobile’s on top once again - 14 quarters in a row as America’s Fastest LTE Network!* - but that’s nothing new.

Apart from unpardonable mistakes like being late to the game with advanced network technologies - 4x4 MIMO, 256 QAM, etc – Verizon has a bigger fundamental problem: spectrum, the life blood of the wireless industry. Verizon has by far the least amount of spectrum per customer! That’s a problem.

This is a big moment. The quarter that Verizon’s network officially and unquestionably begins its descent (thanks a lot unlimited). We like to commemorate such things (and have fun while doing it!).

John Legere, via his social channels, launched a #VZDropsTo3rd Website Hunt just a few minutes ago. We’ve hidden a bunch of websites out in the Internet wilds. We’ve tasked the world with finding them by typing in the correct URLs. The first person to find each website and send the URL to #VZDropsTo3rd wins!

The Results Are In!

The Internet is rad. All of the #VZDropsTo3rd websites have now been discovered…. and with hardly any clues! The sleuthing champions are: Kevin C. Burns, Anthony Paolini and Mr. Ramone T Conley.

For your viewing pleasure:

*14 quarters fastest LTE based on Ookla's analysis of Speedtest Intelligence data from Q1 2014 through Q2 2017. Ookla® trademarks used under license and reprinted with permission. 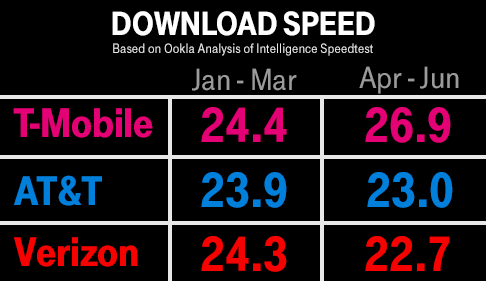