The Un-carrier sets the record straight, invites media and consumers to test ALL of its rapidly-expanding LTE network

Bellevue, Washington — January 21, 2016 — If you’ve turned on a TV, radio or seen pretty much any advertising in the universe in the last couple weeks, you can’t have missed Verizon’s “balls” ad in which Big Red “explains” its network using an outdated test it helped fund—which – surprise, surprise – found Verizon’s network to be the only one worth considering.

The ad is missing details and facts, including the “fine print” that the Verizon test is up to 12 months old and completely ignores that T-Mobile’s LTE network has literally more than DOUBLED in the last year. It also calls out that the “independent” (but partly paid for by Verizon) tests excluded Voice over LTE (VoLTE) technology that handles 40% of T-Mobile’s calls and even ignored T-Mobile’s Extended Range LTE, the Un-carrier’s newest coverage, which goes 2x farther from towers and works 4x better in buildings—among other things.

Meanwhile, Verizon’s network virtually stood still in comparison. And, T-Mobile has more LTE towers nationwide than Verizon, covering 97% of the people Verizon reaches. Verizon’s commercial forgot to include that fact, too. Bottom line: Verizon’s ad uses old data to misrepresent T-Mobile’s network, and the Un-carrier felt it was time to call BS on those claims!

“Verizon is known for their network coverage….so when they suddenly start spending tens of millions in ads to try and convince people their network’s better, it says a lot! Look, we more than doubled our LTE coverage in the last year, and we now have more LTE towers than Verizon! It’s a real horse race,” said John Legere, president and CEO of T-Mobile. “Verizon’s so nervous they’re willing to use old, incomplete data about our network on TV! But they’ve got good reason to panic, more than 5 million Verizon customers switched to T-Mobile in the last two years, and now, we’re going to show everyone else how the two networks really stack up.”

As an added bonus, T-Mobile customers can guarantee someone walks away with a hundred bucks by bringing a friend with any other network on down to The Challenge for a head-to-head match-up where the winner gets $100 richer!

On top of the #BallBusterChallenge, the Un-carrier this morning issued an open invitation to reporters, journalists and bloggers across the country to compare T-Mobile’s network with Verizon. Just email MediaRelations@t-mobile.com with your media credentials, and we’ll send you one smartphone of your choice with service to test out our network for three months. And, if Verizon is afraid of a real head-to-head comparison, the Un-carrier will supply media with Verizon phones and SIMs as well.

By the Numbers – T-Mobile’s Network vs Verizon’s Network 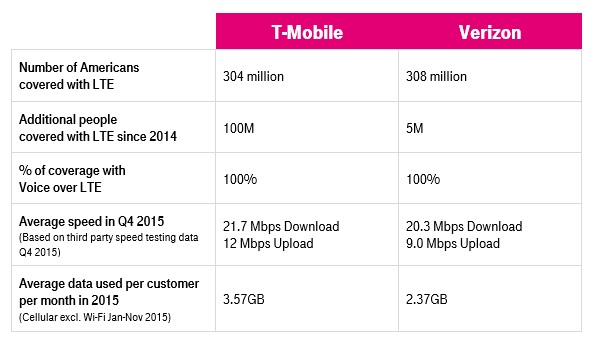 Stay tuned to T-Mobile’s newsroom (newsroom.t-mobile.com) for more information on when the Un-carrier’s #BallBusterChallenge comes to a location near you.

About T-Mobile US, Inc.
As America's Un-carrier, T-Mobile US, Inc. (NASDAQ: TMUS) is redefining the way consumers and businesses buy wireless services through leading product and service innovation. The Company's advanced nationwide 4G LTE network delivers outstanding wireless experiences to more than 63 million customers who are unwilling to compromise on quality and value. Based in Bellevue, Washington, T-Mobile US provides services through its subsidiaries and operates its flagship brands, T-Mobile and MetroPCS. For more information, please visithttps://www.t-mobile.com.