Sometimes, all it takes is a wall and a few buckets of paint to make a bold statement. In the spirit of the brand’s “Rule Your Day” mantra, Metro by T-Mobile partnered with two local artists whose individual stories are as rich as the cities that they call home. These artists were tasked with creating impressive and moving public murals to celebrate the vibrant cultures existing within their communities.

The first of the chosen communities is Southwest Detroit, a largely immigrant community where Mexican heritage and entrepreneurship combine to create a thriving economy. The second location is Tulsa, a city that has seen both triumph and sorrow between the existence of Black Wall Street and the ensuing 1921 Race Massacre.

In festive unveilings that took place on November 19 and 24, the completed murals were welcomed by socially distanced crowds enjoying food trucks and traditional dancing. T-Mobile also donated over $50,000 to local charities that focus on cultural preservation, such as the Southwest Detroit Business Association and the 1921 Tulsa Race Massacre Centennial Commission.

To understand the inspiration for the murals, we caught up with the two artists, Elton Monroy Duran in Detroit and Alexander Tamahn in Tulsa, just following the unveiling ceremonies.

Duran immigrated from Mexico and uses his passion for storytelling to bring his public art pieces to life. 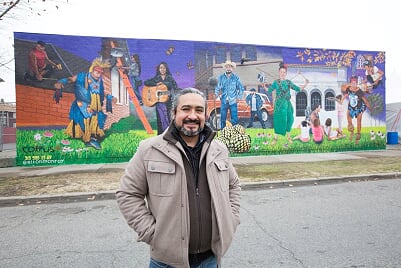 My brain was a storm, then it just came to me. What inspires my murals is the stories, I like listening to what people have to say.

Tamahn, meanwhile, created his series of murals in Tulsa inspired by the city that has allowed him to both develop as an artist and work on projects centered around Black history and empowerment. 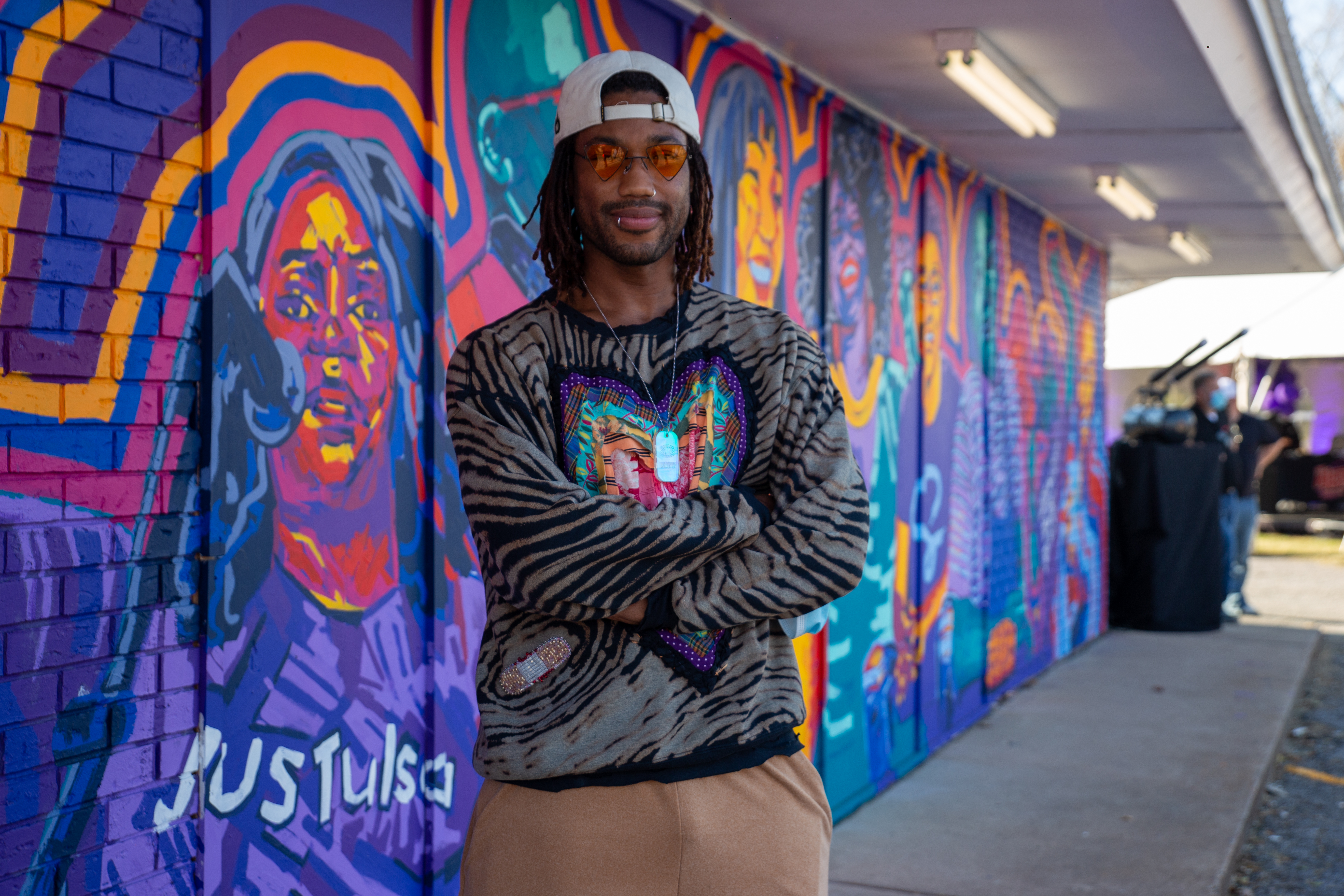 I've always said that before I leave Tulsa, I want to leave my mark.

Here the two dive a little deeper into their art backgrounds, community ties and their thoughts on being selected for the Metro Murals project.

To start off, can you tell us about how your involvement with the Metro Murals project came about?
Elton Monroy Duran: This opportunity is very special, as I’ve been working towards achieving a goal like this. I was selected for this project because of previous work I’ve done here in South Detroit, and that recognition was really fulfilling. I think that this is an amazing campaign, and the project is very personal to me. I am confident that a lot of people are going to identify with the mural. I’m excited for people to be able to see how rich, not only visually but energy-wise, this community is.

Alexander Tamahn: T-Mobile initially reached out to Black Moon, an artist collective that I am a part of, asking about my work. After that, it was a whirlwind. During the first few calls, I was introduced to the “Rule Your Day” campaign and the general timeline for the project. Before the pandemic, this project was supposed to be completed last summer. However, I believe that everything happens for a reason: As we are nearing the centennial of the 1921 Tulsa Race Massacre, this gives the project a whole new meaning. We decided to focus the pieces around Tulsa’s unsung heroes, and the rest, I guess, is history. Murals like these, featuring so many people of color, can be very empowering. It’s impactful to be able to amplify their narratives and to honor these community members in such an extravagant, colorful way.

Can you tell us a little about your background and training as an artist?
E: Becoming an artist was one of my childhood dreams. I went to school for art in Mexico, and after graduation, I worked at a company as a design engineer for six years. I still really wanted to follow my dreams, so I quit and moved to Michigan to pursue a career as an artist. During this phase of my life, a father figure of mine gave me a great piece of advice. He said,

“Why don't you start working on what you want to do?”

That simple idea helped me to become more serious about my art. Since then, I started my own company and have worked on a range of projects, especially public art. I am now in a position where I can hire other artists, providing more people the opportunity to do what they love.

A: I showed a proclivity towards art at a very early age. I was just really into tinkering, deconstructing, reassembling, and reimagining things. Around middle school, teachers really started taking notice of my skill. Art became a way for me to stand out and be exceptional. Full disclosure, I didn't always have the best relationship with some of my art teachers early on. I wanted to develop in my own way, and the classroom left me feeling boxed in. For a while, that really sullied the traditional, or formal art education setting. As I got older, I started taking classes at local community colleges. At this point, I already knew the fundamentals, so I could focus on the techniques and mediums that interested me. As I gained more confidence in my work, I received opportunities to paint murals for close friends and to have my work featured in shows. I was also studying behavioral and mental health and considered working in art therapy. Soon, I faced a fork in the road where I had to choose between a career in counseling or one as an artist, and I went with the latter. I’ve lived in Michigan, Chicago, and now Tulsa, and all of these places have shaped the way I view art.

Can you walk us through your murals?
E: So, I was kind of pushing myself to come up with a concept. The goal was to find a way to spotlight not only Mexican heritage but individuals and their everyday lives. We have a lot of amazing people in the community. This idea of duality is what became the theme of the mural — in the foreground is the version of these people engaging with their cultural roots, and the background is a snapshot of their daily lives. For example, on one of the extremes of the mural is a Native American dancer who is my friend, but he works in roofing. Hearing his story and the history of his traditional role — which involves clearing the ground and making it safe for other dancers — gave me goosebumps. And he’s not the only one. The mural is filled with other rich stories such as my friend who is breaking gender norms as a female mariachi singer, who also volunteers to give underprivileged families access to the internet. Also pictured is a rancher who has a family business fixing cars, an educator who is portrayed as an adelita (women who played an important role in the Mexican Revolutionary War), and another artist friend of mine who is an Aztec dancer. These are the reasons that this project is so personal to me. I can call all of these people my friends, and I know their stories and humble characters.

A: The original version of this mural only included three people, but plans changed, and I was fortunately able to incorporate more community members. There are 11 people on the mural. That number doesn't even hold a candle to the amount of wall space that could be taken up with just the countless women, men and young people that are effecting lasting, positive change in this community. They’re artists, they’re entrepreneurs, they’re children, they’re wives, they’re mothers or husbands, they’re fathers or brothers, sisters. They are community members through and through, and there is no monolithic experience. I think that’s the beauty of it, and I believe they speak to the legacy of Black Wall Street. Championing entrepreneurism, innovation, industriousness, all of that. They do it in droves, and in their own ways, and I think what's also important to name is that a lot of their work is just in response to the needs of the community. This is a place where people look out for each other and really care.

In what ways do you believe cultural artwork can positively impact a community?
E: In my opinion, as a public artist, I think that when you create art in a community, you need to be aware of what the community needs, what the community stands for, and you should try to incorporate those values into the art that people will be looking at. I also think that public art is not only for people to enjoy, but it’s a good tool for people to connect with their own identities, each other, and the history of a place. All of this is on my mind as I paint, and it’s important for me to include the community on a different level. When I envisioned this idea of painting a series of murals in Southwest Detroit, one of my goals was changing the ideas that people have about the neighborhoods. I wanted to show that there was more to Mexicantown than, for example, the restaurants and the food. Not that those things are bad, I just wanted to paint a bigger picture.

A: Oh, my gosh, it can exponentially impact communities. I have a very mixed cultural background, and it’s so important to celebrate where you come from. It’s important to see yourself in the world around you, because that reminds you that it’s okay to take up space. So, if you live in a community where you aren’t shown anyone who looks like you, it can sometimes feel like that community isn’t for you. I think it’s just super, super important for an environment to culturally reflect the people that live in it.