T-Mobile’s network turned in another dominant performance in 2016. For the third year running, our network was faster and advanced faster than any other. In test after test (after test!), our data speeds outstripped the competition. Boom. And we continued to expand our LTE coverage at a breakneck pace. Bam. We launched more advanced LTE technologies than all the others combined. Kapow. Total freakin’ domination.

You know how Super Mario just keeps beating Bowser again and again and AGAIN? Like that.

So, as you might expect, the chinless wonders have been doing more of what they’ve always done. Throughout the year, the mega-boss nobs at the mega-carriers have been revving up their billion-dollar spin machines to spew old myths, half-truths and shameless BS. But, I’m happy to report, people haven’t been buying it. Because there’s a simple way to debunk their myths. We lay out the facts and lay down some Truth!

MYTH #1: You’ve got to put up with Verizon’s (and AT&T’s) costs and carrier craziness to get the best coverage.

Was true. Isn’t anymore. Despite the duopoly’s many years’ head-start, four years into the fastest, most epic network build-out ever, T-Mobile LTE is already going toe to toe with Verizon — and winning. 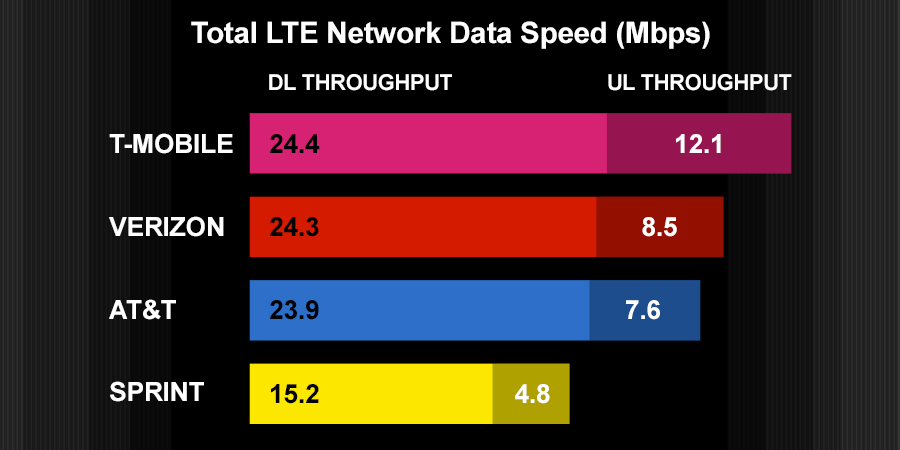 In short, the days when you had no choice but to grin and bear the carrier BS are gone. Good riddance!

FACT:  Today, you can get better value AND a better network—without the carrier costs and craziness.

Bonkers! This year, Verizon breathlessly broadcast the launch of their “LTE Advanced” network. (Implicit in their big news, of course, was that you should be thanking them for the privilege of paying through the nose to use it!) Here’s the funny thing: Verizon was actually beginning its rollout of a technology (carrier aggregation) that T-Mobile customers had been enjoying since 2014. At the time of Big Red’s launch, our customers were already reaping the benefits of this LTE Advanced technology – and now it’s in more than 500 markets nationwide. Verizon’s “Advanced” network was also touted as “50% faster” than before —and yet, was still slower than T-Mobile in the most recent speed tests. But, of course, these facts didn’t deter Verizon’s billion-dollar spin machines.

Some may not be ready to hear it, but T-Mobile now delivers the nation’s most advanced LTE network. It’s the simple truth. Along with a host of other technologies our customers were first to experience, they’re also already enjoying seven LTE Advanced technologies—including VoLTE with eSRVCC, Carrier Aggregation, CoMP, SON, HetNets, EVS and higher order modulation. And, I’m happy to announce that T-Mobile customers now lead customers of all wireless providers worldwide in their use of VoLTE—with 64% of all customer calls made over VoLTE each and every day. We were the first operator in the US to launch 4x4 MIMO and 256 and 64 QAM in 2016, and we’re far from done. We’re advancing our network further every day. In fact, while Verizon is talking about 1 Gbps on 5G, just last week we reached nearly 1 Gbps (979 Mbps) on our LTE network in our lab thanks to a combination of three carrier aggregation, 4x4 MIMO and 256 QAM (and an un-released handset). This is the fastest speed possible on a mobile device today and T-Mobile will absolutely be first to Gigabit speeds! Ever advancing LTE will continue be the technology that powers wireless into the next decade – and there will be major advancements to come, well beyond “just” Gigabit speeds. And I’m betting that we’ll continue to be first to market with them.

MYTH #3: If you want two numbers, you need two phones.

Old-school rubbish. Phones today are nothing at all like they were even a decade ago, but the phone number has been stuck in time since the 19th Century. That’s why more than 30 million Americans carry multiple devices. They juggle identical phones with work and personal numbers and pay for two or more devices, two or more plans and two or more times the network access fees—which costs these customers an extra $10 billion every year. Which, of course, makes the carrier bosses fat and happy.

So we’re blowing up a century-old paradigm.

DIGITS, which we launched in beta just last month, ends all that backward thinking and pocket-picking. Now, your T-Mobile number can work across virtually all your connected devices—phones, tablets, wearables and computers. Our team dug deep into the technology needed to free us from the one number, one phone limit. And to do it right, we built a solution into the core of our network that breaks all the old telco rules. To the carriers—and their telecom model—you’re just a phone number and a piece of hardware. With DIGITS, it’s all about you communicating the way you want. This opens up a whole new world of possibilities.

When DIGITS launches next year, the way people buy and use mobile devices will be changed forever.

FACT:  With DIGITS, you can get multiple numbers on one device and use one number across all your devices.

MYTH #4: All networks are created more or less equal—give or take only 1% difference.

This one’s all mouth and no trousers. Sprint’s ad line, “Why pay twice as much for only 1% difference?” is catchy. Sadly, it’s also pure tosh. You’re getting half the network (if you’re lucky) for an advertised half-priced (or is it half-assed) buy.

Out of desperation, Sprint have become masters in dodgy data manipulation. Their “data experts” apparently extracted that “1% difference” from select markets in a moribund Nielsen drive test, creating a set of results allowing them to claim a 1% difference in the availability of any signal whatsoever -- with zero distinction between 2G, 3G or 4G, nor the performance of that signal.

The performance and capability of the Sprint network you get is sadly (and I’m sure purposefully) lacking in their cherry picked data. Look at any other metric from that same report—or any other report out there at all—and one thing becomes blindingly clear. There are critical differences in customers’ wireless network experiences. And Sprint’s network’s gone all to pot. Their customers have less coverage—with no LTE signal nearly 25% of the time. Their customers endure an LTE network slower than any other—nearly 40% slower than T-Mobile on download and 60% slower on upload. And their customers still can’t use voice and data simultaneously—what year is it again?

Add to this their far-off promises that they’ll fix their network with software and new handset technology (HPUE or is it HYPE!), and it’s clear it’ll take a very long time, and new phones that don’t even exist yet, to get anything close to a competitive experience on their network. If their 1% marketing line weren’t catchy as it is, I would almost hate to dog on them because they’re so far behind. They were right when they said “you ain’t seen nothing yet.” Sorry Sprint.

FACT:  There are vast differences in customers’ network experiences. Sorry Sprint, but your network is DFL on every meaningful metric.

No one’s more excited about this brilliant technology than I am. But it will take several more years for 5G to be meaningful for mobile. The carriers’ current vision for 5G is mind-numbingly limited. 5G’s potential is so much larger than replacing in-home broadband and IoT. But they can’t see beyond their own wallets. AT&T wants to “connect your world” – including your bank account – to AT&T. Verizon’s grand vision is that you Netflix at home with wireless Verizon broadband. How is that game changing?

The truth is that 5G is about all the as-yet-unimagined possibilities of mobile technology. We see5G completely transforming the mobile Internet and delivering brilliant breakthroughs. We see a 5G future where every major tech trend that sparks our imaginations – mobile VR, AR, AI and more – will all be made better and available on-the-go because of 5G. Just as 4G spawned the mobile-first Internet and gave rise to applications and devices that have changed how we live, work and play, 5G will unlock experiences we can’t yet imagine. We’ve already demonstrated mobile speeds of 1.8 Gbps, fixed speeds of 12 Gbps with latency under 2 milliseconds, 8x8 MIMO and four simultaneous 4k video streams.

FACT:  5G’s real potential is in unlocking revolutionary new mobile experiences for our customers. In time.

Brilliant. Much better. Feels good to clear the air and sweep away so much carrier BS before we start the New Year!

Before I sign off, I want to leave you with a promise. Now that we’ve closed the coverage gap with the Duopoly, any other company might sit back and celebrate. But T-Mobile isn’t just any company. We’re the Un-carrier. And we won’t stop. We’ll keep racing forward—maybe find a whole new gear—through 2017 and beyond.