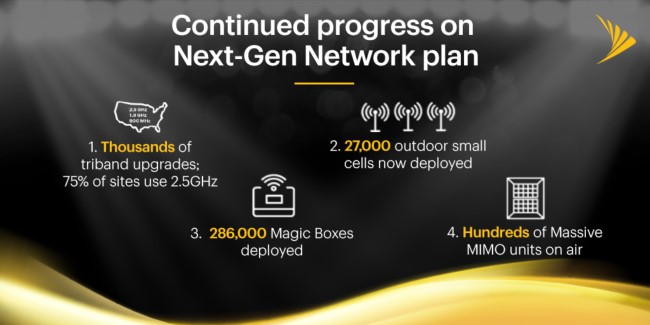 We’re not standing still during the merger approval process, and we’ve seen a number of network achievements as we prepare to launch mobile 5G in the coming months. For example:

More Spectrum Now On Air: We completed thousands more triband upgrades in Q3, and today we’re giving customers faster data speeds with 2.5 GHz deployed on roughly 75% of our macro sites. In addition, we’ve added 800 MHz to thousands of sites, primarily in the Southwest. This extends our voice and data coverage into more locations, including indoors where the majority of wireless traffic is generated.

Outdoor Small Cells Increase Speed and Capacity: In Q3 we deployed thousands of 2.5 GHz outdoor small cells – both mini macros and strand mounts – to now total 27,000 on air. We’ve more than doubled our on-air mini macros year-over-year, and had a very successful rollout of strand mounts on cable infrastructure, with both tools significantly improving our customers’ network experience in targeted locations.

Gigabit Class LTE Expands: Our network uses the most innovative LTE Advanced technologies in wireless such as High Performance User Equipment (HPUE), 256 QAM, 4X4 MIMO, multiple carrier aggregation and more. LTE Advanced is delivering customers up to 2X faster speeds than before on capable devices. Plus we’ve expanded Gigabit Class LTE to nearly 300 cities. (And no, we don’t label any of this 5G, because it’s not.)

Massive MIMO Boosts LTE Capacity: Hundreds of 5G-ready Massive MIMO radios are now on air delivering a big boost in LTE speed and capacity as we prepare to light up mobile 5G service. In Atlanta, one of our first nine 5G launch markets, Sprint customers at the Big Game this weekend will have a great experience benefiting from the major investment we’ve made in network upgrades and our deployment of Massive MIMO. In fact, recent independent crowdsourced tests show Sprint had the fastest average download speeds around the stadium. 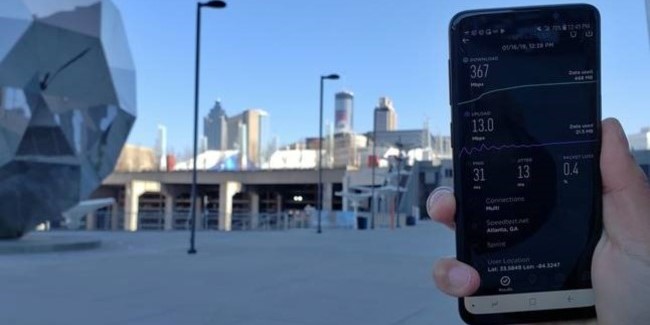 Meanwhile, over in Reston, Virginia, Massive MIMO is pushing a 4X to 20X increase in speeds (both indoors and outdoors) at the Reston Town Center, a popular destination with more than 50 stores and 30 restaurants. It’s the type of high-traffic location that’s perfect for Massive MIMO and 3D antenna beamforming – technologies that excel at moving more data, to more people, at significantly faster speeds than before. With newly added capacity from Massive MIMO, our network traffic at this location has jumped 42% and the number of connections have doubled, due in large part to improved indoor coverage.

Average Downloads Speeds Increase: Sprint customers love Unlimited data and we’re meeting this demand by adding more capacity and speed to our network. Today we have a national average download speed of 29 Mbps1, and speeds are up 93% over the past two years.2 In addition, the latest quarterly data from Ookla shows no one beats Sprint for fastest average download speeds in 105 cities.3

Other reports show similar improvements in a number of cities. Recent data from RootMetrics® by IHS Markit shows Sprint has the fastest download speeds in Manhattan, Los Angeles, Denver, Seattle and Boston.4 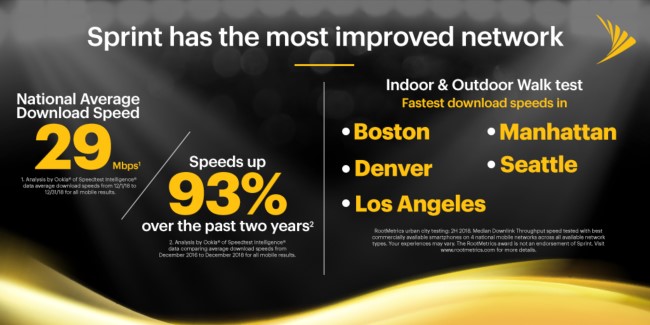 With our largest network investment in years well under way, we’re working hard to improve our LTE Advanced network and launch mobile 5G. We also continue to advocate for our merger with T-Mobile, knowing that together we can build an incredible nationwide 5G network neither company could achieve on its own that reaches underserved communities, accelerates competition, and drives new levels of innovation for all U.S. businesses and consumers.

1 Analysis by Ookla® of Speedtest Intelligence® data average download speeds from 12/1/18 to 12/31/18 for all mobile results.

2 Analysis by Ookla® of Speedtest Intelligence® data comparing average download speeds from December 2016 to December 2018 for all mobile results.

3 Analysis by Ookla® of Speedtest Intelligence® data for average download speeds from 10/1/18 to 12/31/18 for all mobile results.

No Offer or Solicitation

This communication shall not constitute an offer to sell or the solicitation of an offer to buy any securities, nor shall there be any sale of securities in any jurisdiction in which such offer, solicitation or sale would be unlawful prior to registration or qualification under the securities laws of any such jurisdiction.  No offering of securities shall be made except by means of a prospectus meeting the requirements of Section 10 of the U.S. Securities Act of 1933, as amended.