They say food is love, and for the people behind the recipes featured in a cookbook that showcases the rich diversity of T-Mobile employees’ Latino culture, there’s no more authentic way to show love for their Hispanic heritage than through the dishes they grew up with.

“That’s one of the beautiful things about the Hispanic culture,” says Jeanette Rodriguez, a retail store manager in Orange County, California. “It really centralizes around making sure that you’ve eaten!”

And when members of the Consumer Group organization (previously known as Consumer Markets) decided it might be fun to put together a cookbook to celebrate Hispanic Heritage Month last year, employees across the country made sure there would be enough recipes within to guarantee everyone gets seconds.

“Honestly, we were blown away by the interest and participation,” says Melinda Carter, a senior program manager based in Overland Park, Kansas. “We thought if we could get twenty to twenty-five good recipes and stories with no duplicates, that would be a success. But these amazing recipes, stories and photos kept rolling in. Not only did we have responses from all over the country, but the recipes submitted came from a range of job roles and a blend of our different distribution and retail channels.”

With over 100,000 members, T-Mobile’s Consumer Group encompasses all consumer strategy, marketing and operations teams alongside frontline field sales teams across the nation at more than 18,000 distribution points, including retail stores, for both T-Mobile and Metro by T-Mobile. T-Mobile recently released its Corporate Responsibility Report that showcases the company’s workforce diversity numbers, citing 60.1 percent of its employees identify as people of color and 27.6 percent as specifically identifying as Hispanic.

When it became clear the cookbook was a way employees wanted to celebrate the month together, organizers went big, and Consumer Group EVP Jon Freier approved funding to make it happen. It took months to choose from the submissions, before landing on fifty recipes that spanned as much of the Latin world as possible. That’s when they began working on producing something that not only showcased wonderful food to cook, but also takes the reader on a tour of Hispanic culture all over the world with deeply personal stories behind the delectable dishes.

A regional map in the opening pages starts the culinary learning-journey in Mexico, traveling through Central and South America, and then sailing the Caribbean to Cuba, Puerto Rico, the Dominican Republic and all the way east to Spain — denoting staples, flavors and ingredients that are significant or more plentiful to each region.

Each employee who submitted a recipe was gifted a hard copy of the cookbook, and a digital file was also shared for other employees to dig in and enjoy. 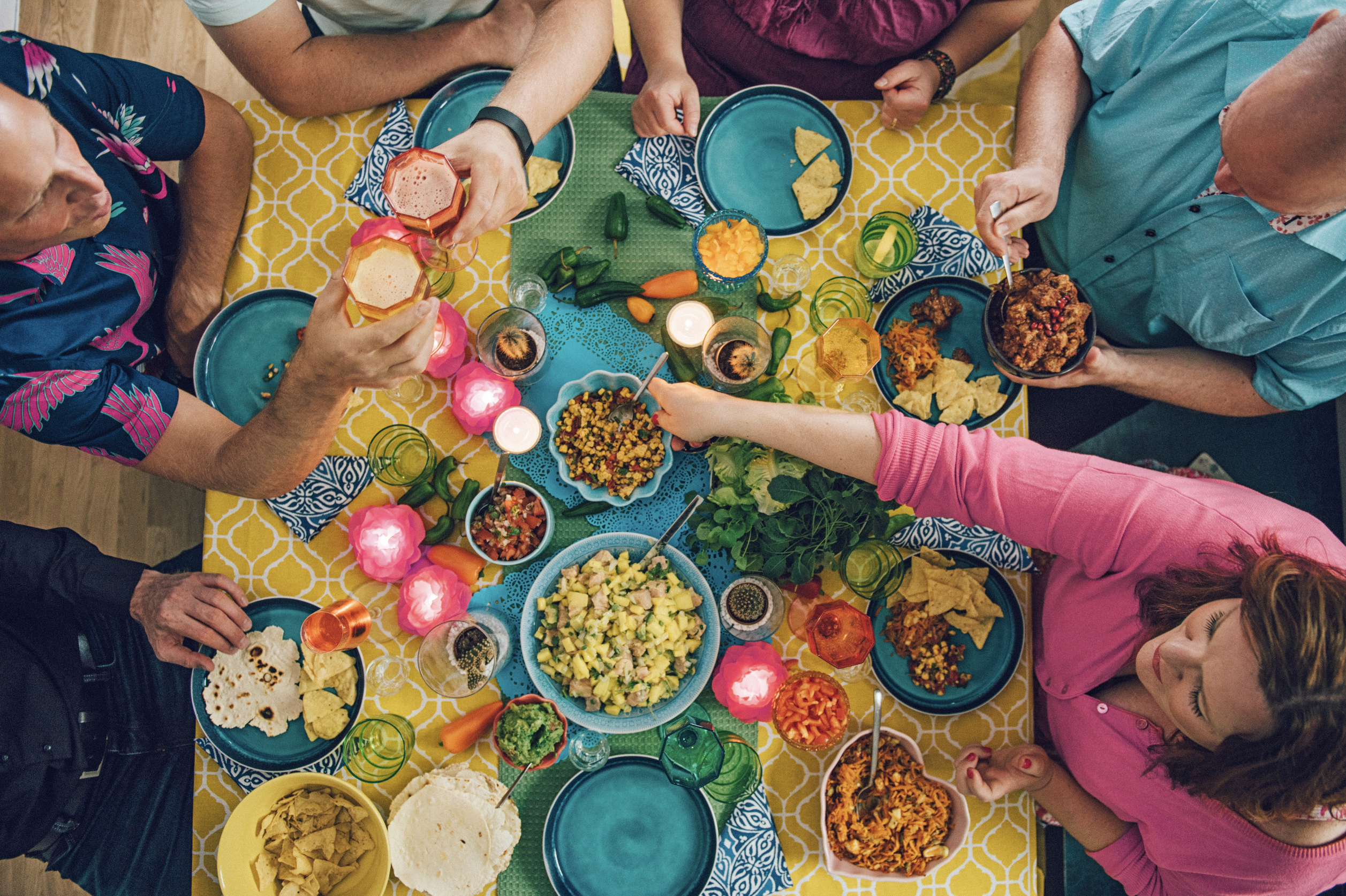 For me the earliest memory I have of enjoying this dish is celebrating when my mother became a U.S. citizen.

“There were so many recipes that honestly surprised me because many I had been eating since I was a little girl and I never knew where they came from,” says Jessica Rodriguez, a retail store manager in Virginia. “I just knew them as Spanish or Latino food, but to get to understand where they come from and the history and background was amazing. Just like I have my own culture from Guatemala, now I get to see that in all these other Latin countries.”

Jessica submitted her family’s tamales recipe because, as she says through a giggle, “it’s like Christmas in your mouth! It’s just amazing how the taste can bring back so many memories from your childhood.”

But all kidding aside, it’s the importance of the memories attached to that taste that easily brings tears she can’t possibly fight back when she talks about them.

“I remember being young and my father being there making the masa and my mother making the meat,” Jessica says. “Being together at that time was special because that’s when we were with my father who is no longer with us. The tamales were a way to bring us together, especially during the holiday season. It’s something I want to give to my kids and that I want them to then pass down.”

Jeanette decided to submit her mother’s pozole de pollo recipe, not only because it reminds her of the tastes of her family’s native Mexico and the ingredients she loved most as a child, but also because of what the dish represents to her family.

“For me the earliest memory I have of enjoying this dish is celebrating when my mother became a U.S. citizen,” Jeanette explains. “Every time I make pozole or if I smell it, it brings me back to that day and to that table as a little girl, looking across at my mom being so proud.”

She says she didn’t understand then about the struggle her mother went through to get here, but knowing now how important that moment was to her has made the dish a reminder of what her mother did for her and her three siblings: “It’s so beautiful to now see my kids and my mom cooking the same dishes together in the kitchen, so it really brings back great memories and I’m so happy that my kids get to experience this and make those memories as well with my mother.” 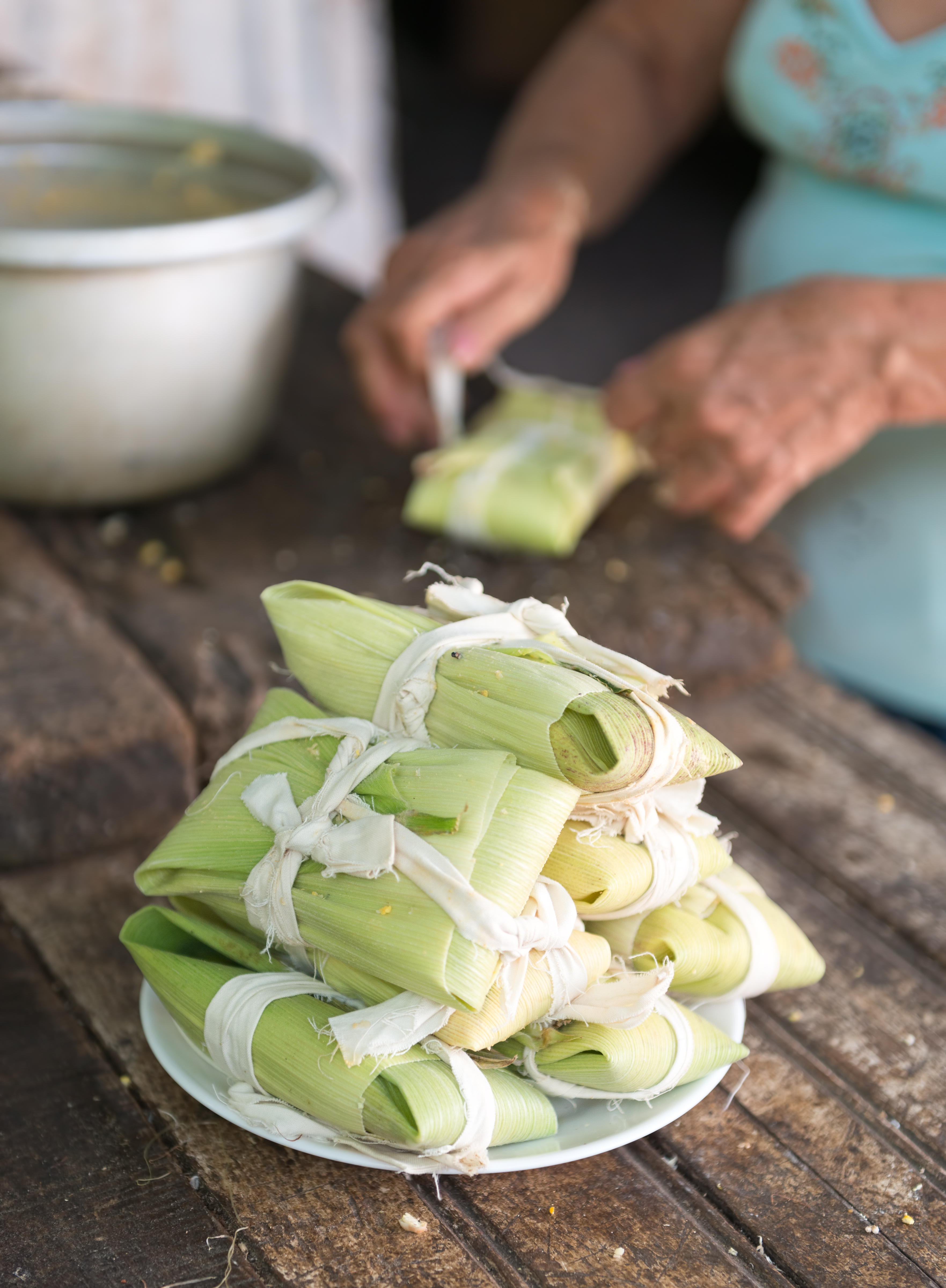 The tamales were a way to bring us together, especially during the holiday season.

The project team says they felt a responsibility to showcase these memories in the manner they deserve, and it shows. Carol Franco, a senior program manager in the Consumer Group, and Amy Willson, a digital designer, pored over one hundred and six pages with undeniable expert production value utilizing beautiful images and stories behind each recipe. There’s even a glossary of the regional ingredients that aren’t as common in the U.S.

“The hardest part was the hours of editing the team put into the project,” Melinda says. “Making sure all the measurements were consistent throughout each page, correcting grammar and spelling, ensuring consistent formatting. The most rewarding part of the project was hearing from those who submitted recipes upon receiving their hard-copy — I think the final product exceeded anyone’s expectations. It’s a true example of how we work and win together.”

And the timing only reinforced the importance of this project to celebrate something integral to all of these Hispanic dishes — the stories and the families behind them. Organizers began to curate the recipes at the height of the pandemic, when most families that traditionally cooked these dishes during the following holidays and shared them together at a table, were suddenly forced apart for safety.

To know that during this year’s Hispanic Heritage Month so many kitchens will be bustling once again, and the smells and tastes of these recipes rich with flavor and memories will be enjoyed, is something everyone involved appreciates more than ever.

“For us we really show a lot of love through food,” explains Jeanette. “That’s our love language.”

Hungry for more? Well, you’re in luck! Also in celebration of Hispanic Heritage Month, T-Mobile has welcomed Aarón Sánchez, award-winning chef, author and philanthropist as its latest guest-speaker for its internal Talking with Trailblazers series to discuss Aarón’s cooking career, his passion for preserving his family’s legacy through food, allyship and what he’s doing to support future Hispanic chefs and leaders. Look out for a recap of the event!