Did you catch the Big Game yesterday? Beyoncé, Bruno, Coldplay and the Broncos defense—they really killed it, didn’t they? And I’m thrilled at how T-Mobile’s network performed for our customers. Verizon pumped $70 MILLION into shoring up their network for the big event—and we still blew them away… no matter how hard they tried to pretend otherwise.

Remember that #BallBusterChallenge? We took The Challenge to Santa Clara last week and our network crushed it against Verizon. The final score: a complete shut out. Customers at the stadium yesterday saw it for themselves, too. @AskDes was at the game and got a few examples of our speeds in real-time here, here and here. How did the networks hold up at the Big Game overall? You can see in the chart below, based on near-real time crowd-sourced data. 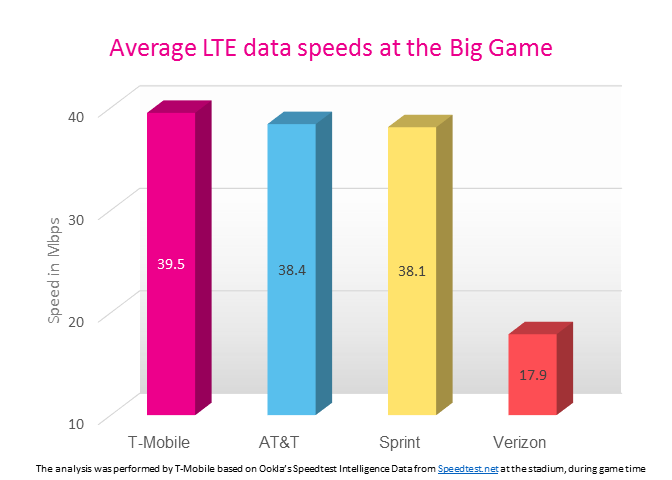 With our network delivering those wicked-fast speeds, T-Mobile customers at the stadium blew through 5 times more data streaming, surfing, Facetiming, Facebooking and Instagramming than they did at the Big Game last year. Twenty-nine percent of data was used for social media apps, including a total of 166,700 Instagram posts, and over 119,250 snaps from Snapchat. Another twenty-nine percent of data was used for video. And yes, there were even a few hundred swipes on Tinder.

But you know what the real beauty of #BallBusterChallenge is? It’s the fact that real customers in the real world get to see how the networks stack up for themselves. If you caught our new spot during The Big Game (and the one before), you now know the truth about Verizon’s colorful balls. Verizon took outdated data from outmoded tests and made some old claims look new. In the same way, Sprint’s been pointing to questionable data to claim they have the fastest network in the nation—which runs completely counter to most network benchmark tests. And AT&T? They’re still claiming to have the strongest network signal—though no one really knows what that means! So, with all the competing and confusing network claims flying around lately, I decided it was time for me to set aside the spin and the BS and look at the indisputable facts about T-Mobile’s network.

Fact: Last year, we more than DOUBLED the footprint of our LTE network; and we have added over 1 million square miles and covered almost 100 million more Americans than in 2014

Fact: We’ve launched Extended Range LTE in over 300 metro areas, which carries signals 2x farther from the tower and 4x deeper into buildings than before

Fact: Over the past two years, over 5 million Verizon customers and over 6 million AT&T customers switched to T-Mobile’s network

And we know those facts translate directly into an unmatched network experience for our customers. How do we know? Tens of millions of real-time, crowd-sourced tests by millions of real customers using their own, unaltered devices where they live, work and play.

Result:OpenSignal research shows we offer the fastest LTE network on top of “closing the gap with Verizon” in overall LTE coverage

Those are the real facts and real test results reflecting real customer experiences with our network performance. So here’s the real question. Why would Verizon continue to pay huge sums to RootMetrics (the source Verizon cites in their ads) for data up to a year out-of-date and collected through outmoded drive-tests? Could Verizon be so desperate about losing those millions and millions of customers to T-Mobile that they’d cherry-pick old skewed data to make the claim that they’ve got the only network worth considering—and make T-Mobile’s network look unworthy? Could they be that threatened by T-Mobile?

The fact is that there are fundamental flaws in these old drive-test methods and results that are used to make these BS claims. You saw that in Verizon’s balls ad. And you’ll see it again in RootMetrics’ next nationwide report.

FLAW: First, by the time the drive-tests are done and the results published, the data is already months out of date. Then, if they like the results, carriers keep on trumpeting those outdated claims till the end of time.

Case in point: the RootMetrics data used in Verizon’s colorful balls ad is based on test results that are up to a year old, and skews reality because they chose to ignore new T-Mobile coverage added last year.

And to make matters worse, for reasons completely beyond me, in their most recent drive-tests which will publish soon, not only will the data still be months old, RootMetrics chose to disable Voice over LTE (VoLTE) which handles over 40% of our customers’ calls today. RootMetrics chose to turn off technologies that come on all new T-Mobile phones. Let me say that again. They chose to disable the most powerful, most advanced technologies T-Mobile’s network delivers to our customers. And in addition, they took months to start testing with our Extended Range LTE capable phones, further limiting the coverage results reported. Guess these guys aren't quite ready for the full Monty.

Cheating on the Test

Let’s take a quick moment to look at Sprint’s truly bizarre claim that they actually deliver the fastest LTE network—when every other network benchmark test out there measures Sprint’s network as the slowest. Here’s how Sprint twists data (provided by Nielsen) to make their twisted claim.

The fact is, the Nielsen data isn’t actually a measure of network performance at all.

ANOTHER FLAW: Nielsen measures the experience of a small panel of customers based on how those customers choose to use their wireless data—not based on the network’s actual speed performance.

Here’s a perfect example. Music streams at lower network speeds simply because streaming music requires less bandwidth and speed. T-Mobile customers stream a lot of music—thanks to Music Freedom. Video optimized for mobile phones with BingeOn is also reflected in Nielsen’s data. To make the case that their network is faster, Sprint uses data that doesn’t reflect what a network can do; it reflects what a user might choose to do. Sprint calls this “delivered speeds”. I call it false advertising. And I’m not alone.

The Proof’s in the Palm of Your Hand

At the end of the day − after all the tests, the data, the ads and the claims – it’s about the customer’s real-world network performance. And crowd-sourced data − representing millions of real customer experiences in near-real-time, in places you actually use your phone, on the devices you actually use every day − is the most credible reflection of the customer experience. Because, it’s the real measure of network speed, that’s the method we use. That’s what the FCC uses. It’s the most unbiased method out there.

For years, Verizon’s network set the standard by which everyone else was measured. Now, we’ve pulled into a virtual dead heat and they clearly HATE it! Today, T-Mobile covers just about every man, woman and child in America—with the nation’s fastest 4G LTE network. Even setting aside network benchmarking, you can’t ignore the real network facts. Today, we have the momentum. Our network has grown so far so fast the past two years, we want you to see the truth for yourself.

You can always find the real facts about our network at www.t-mobile.com/network. And follow #BallBusterChallenge on Twitter to see more!