BELLEVUE, Wash. – April 24, 2017 – T-Mobile US, Inc. (NASDAQ: TMUS) celebrates its 4th year as a public company with another incredible quarter where it expects to lead the industry in customer and financial growth. In addition, the 600 MHz auction results represent a major milestone for T-Mobile, enabling the Un-carrier to bring real choice and competition to wireless customers in every part of the United States.

In Q1 2017, we added 1.1 million total customers, marking four straight years of adding more than 1 million every quarter. In addition, we added 798,000 branded postpaid phone customers in the quarter and expect to capture over 250% of the industry's postpaid phone growth. The continued success at MetroPCS, the industry’s #1 prepaid brand, helped deliver 386,000 prepaid net additions. As result of the strong customer growth, we grew service revenues by 11% year-over-year in Q1 2017, in a quarter where all of our peers are expected to show declines. This level of consistent outperformance continues to distinguish T-Mobile from the competition, and our outlook for 2017 shows that we plan to continue producing strong customer and financial growth.

"We’ve been beating up on the competition for over 4 years now while making wireless better for consumers," said John Legere, President and CEO of T-Mobile. "Q1 was no different with T-Mobile again producing the best customer and financial growth in the industry. Add to that our recent success in the 600 MHz spectrum auction and it’s clear we’re just getting started!"

T-Mobile has developed a winning Un-carrier formula built around listening to customers and solving their pain points. For more than four years, we have completely disrupted the wireless industry and forced the competition to change. To date, T-Mobile has launched 13 consumer-friendly Un-carrier moves including the elimination of annual service contracts, ending overages, enabling upgrades anytime, free international data roaming in over 140 countries and destinations, unlimited music and video streaming, and offering all unlimited data plans with taxes and fees included. Customers have responded and continue to choose T-Mobile over the competition.

It’s not just about gaining customers, it’s also about creating value for shareholders. T-Mobile continues to focus on translating its incredible customer growth into financial growth – and that’s clearly showing up in our Q1 2017 results.

(1) The amortized imputed discount on EIP receivables previously recognized as Interest income has been retrospectively reclassified as Other revenues. The effects of this change in accounting principle are provided in the financial tables.

The 600 MHz auction is a huge win for consumers and for T-Mobile. We recently announced our largest investment ever by purchasing an average of 31 MHz of 600 MHz low-band spectrum covering 100% of the U.S. for $8.0 billion or $0.83 per MHz / POP. This spectrum will be used to strengthen existing LTE coverage and increase capacity to meet customers' growing demand for mobile data. T-Mobile expects that at least 10 MHz covering over one million square miles will be clear in 2017 and we will begin to put this new spectrum to use to benefit T-Mobile and MetroPCS customers later this year. With this purchase, T-Mobile now has significantly more low-band spectrum per customer than any other major provider and nearly TRIPLE the low-band spectrum per postpaid customer compared to Verizon.* Overall, this spectrum increases our total spectrum portfolio by 39% and sets the stage for continued business momentum.

T-Mobile has substantially completed the deployment of its 700 MHz A-Block spectrum with the recent launch of Chicago. "Extended Range LTE" is now live in over 530 market areas covering 269 million people. Our network expansion provides a unique ability to grow our distribution footprint by 30 to 40 million POPs. We plan to open 3,000 stores in 2017, including 1,500 T-Mobile stores and 1,500 MetroPCS stores.

At the end of Q1 2017, approximately 71% of then-owned spectrum was being used for 4G LTE compared to 54% in Q1 2016. We expect to continue to re-farm spectrum currently committed to 2G and 3G technologies. Re-farmed spectrum enables T-Mobile to continue expanding Wideband LTE, which currently covers 235 million people. During Q1 2017, we continued to deploy and expand new technologies like VoLTE, Carrier Aggregation, and 4×4 MIMO that have delivered material capacity benefits to both customers and the T-Mobile network.

All of these improvements have enabled T-Mobile’s 4G LTE network to be the fastest in the nation based on both download and upload speeds from millions of user-generated tests. This is the thirteenth consecutive quarter that we have held the title for fastest LTE network.

Branded postpaid net customer additions for full-year 2017 are now expected to be between 2.8 and 3.5 million, an increase from the previous guidance range of 2.4 and 3.4 million. While net income is not available on a forward looking basis, we are maintaining our target of between $10.4 and $10.8 billion in Adjusted EBITDA, which includes leasing revenues of $0.8 to $0.9 billion.

Cash capital expenditures guidance, excluding capitalized interest, is unchanged at $4.8 to $5.1 billion. Three-year CAGRs for net cash provided by operating activities and free cash flow from full-year 2016 to full-year 2019 also remain unchanged at 15% to 18% and 45% to 48%, respectively.

* Spectrum holdings include the 31 MHz of 600 MHz low-band spectrum that we have committed to purchase for which license grants are expected to be made at the conclusion of the FCC’s standard post-auction licensing process.

For more details on T-Mobile’s Q1 2017 financial results, including the Investor Factbook with detailed financial tables and reconciliations of certain historical non-GAAP measures disclosed in this release to the most comparable measures under GAAP, please visit T-Mobile US, Inc.'s Investor Relations website at http://investor.T-Mobile.com.

Investors and others should note that we announce material financial and operational information to our investors using our investor relations website, press releases, SEC filings and public conference calls and webcasts. We also intend to use the @TMobileIR Twitter account (https://twitter.com/TMobileIR) and the @JohnLegere Twitter (https://twitter.com/JohnLegere), Facebook and Periscope accounts, which Mr. Legere also uses as a means for personal communications and observations, as means of disclosing information about the Company and its services and for complying with its disclosure obligations under Regulation FD. The information we post through these social media channels may be deemed material. Accordingly, investors should monitor these social media channels in addition to following our press releases, SEC filings and public conference calls and webcasts. The social media channels that we intend to use as a means of disclosing the information described above may be updated from time to time as listed on our investor relations website.

About T-Mobile US, Inc.

As America's Un-carrier, T-Mobile US, Inc. (NASDAQ: TMUS) is redefining the way consumers and businesses buy wireless services through leading product and service innovation. Our advanced nationwide 4G LTE network delivers outstanding wireless experiences to 72.6 million customers who are unwilling to compromise on quality and value. Based in Bellevue, Washington, T-Mobile US provides services through its subsidiaries and operates its flagship brands, T-Mobile and MetroPCS. For more information, please visit https://www.t-mobile.com or join the conversation on Twitter using $TMUS.

Please plan on accessing the earnings call ten minutes prior to the scheduled start time.

The earnings call will be broadcast live via our Investor Relations website at http://investor.t-mobile.com. A replay of the earnings call will be available for two weeks starting shortly after the call concludes and can be accessed by dialing 888-203-1112 (toll free) or 719-457-0820 (international). The passcode required to listen to the replay is 4867010.

This news release includes "forward-looking statements" within the meaning of the U.S. federal securities laws. Any statements made herein that are not statements of historical fact, including statements about T-Mobile US, Inc.'s plans, outlook, beliefs, opinions, projections, guidance, strategy, store openings, deployment of spectrum and expected network modernization and other advancements, are forward-looking statements. Generally, forward-looking statements may be identified by words such as "anticipate," "expect," "suggests," "plan," “project,” "believe," "intend," "estimates," "targets," "views," "may," "will," "forecast," and other similar expressions. The forward-looking statements speak only as of the date made, are based on current assumptions and expectations, and involve a number of risks and uncertainties. Important factors that could affect future results and cause those results to differ materially from those expressed in the forward-looking statements include, among others, the following: adverse economic or political conditions in the U.S. and international markets; competition in the wireless services market, including new competitors entering the industry as technologies converge; the effects any future merger or acquisition involving us, as well as the effects of mergers or acquisitions in the technology, media and telecommunications industry; challenges in implementing our business strategies or funding our wireless operations, including payment for additional spectrum or network upgrades; the possibility that we may be unable to renew our spectrum licenses on attractive terms or acquire new spectrum licenses at reasonable costs and terms; difficulties in managing growth in wireless data services, including network quality; material changes in available technology; the timing, scope and financial impact of our deployment of advanced network and business technologies; the impact on our networks and business from major technology equipment failures; breaches of our and/or our third party vendors’ networks, information technology and data security; natural disasters, terrorist attacks or similar incidents; existing or future litigation; any changes in the regulatory environments in which we operate, including any increase in restrictions on the ability to operate our networks; any disruption or failure of our third parties’ or key suppliers’ provisioning of products or services; material adverse changes in labor matters, including labor campaigns, negotiations or additional organizing activity, and any resulting financial, operational and/or reputational impact; the ability to make payments on our debt or to repay our existing indebtedness when due; adverse change in the ratings of our debt securities or adverse conditions in the credit markets; changes in accounting assumptions that regulatory agencies, including the Securities and Exchange Commission (“SEC”), may require, which could result in an impact on earnings; and changes in tax laws, regulations and existing standards and the resolution of disputes with any taxing jurisdictions; and other risks described in our filings with the SEC, including those described in our most recently filed Annual Report on Form 10-K. You should not place undue reliance on these forward-looking statements. We do not undertake to update forward-looking statements, whether as a result of new information, future events or otherwise, except as required by law.

Effect of Change in Accounting Principle

Effective January 1, 2017, we began presenting the amortization of the imputed discount on our Equipment Installment Plan (“EIP”) receivables as Other revenue on our Condensed Consolidated Statements of Comprehensive Income. Prior to the change, the imputed interest was presented as Interest income. We made this change to provide a better representation of amounts earned from our major ongoing operations, align with industry practice and enhance comparability. We have applied this change in accounting principle retrospectively and presented the effect of the change in the table below. For additional information, see Note 1 – Basis of Presentation of the Notes to the Consolidated Financial Statements included in Part I, Item 1 of our Form 10-Q filed April 24, 2017.

Adjusted EBITDA is reconciled to net income as follows:

(1) The amortized imputed discount on EIP receivables previously recognized as Interest income has been retrospectively reclassified as Other revenues. See the Effect of Change in Accounting Principle table for further detail.|

(2) Beginning Q1 2017, we will no longer separately present Cost of MetroPCS business combination as it is insignificant.
(3) Stock-based compensation includes payroll tax impacts and may not agree to stock based compensation expense in the condensed consolidated financial statements. Other, net may not agree to the Condensed Consolidated Statements of Comprehensive Income primarily due to certain non-routine operating activities, such as other special items that would not be expected to reoccur, and are therefore excluded in Adjusted EBITDA.

(1) The amortized imputed discount on EIP receivables previously recognized as Interest income has been retrospectively reclassified as Other revenues. See Change in Accounting Principle table for further detail.

The following tables illustrate the calculation of our operating measures ARPU and ABPU and reconcile these measures to the related service revenues: 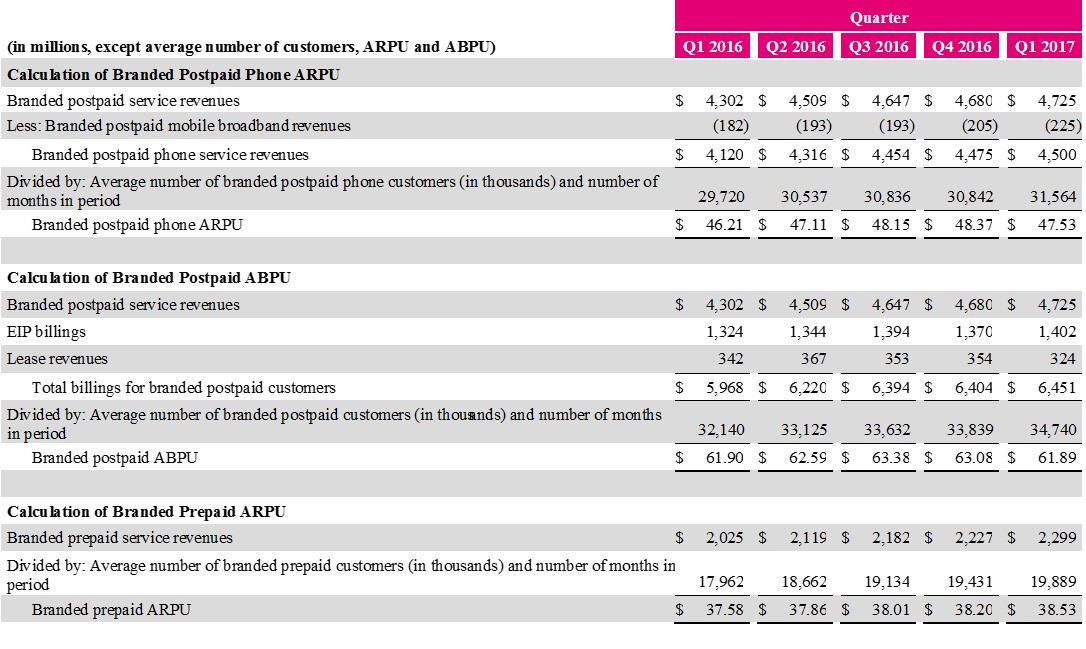