The best weapon against choking to death can be summed up in a single word: Chew. 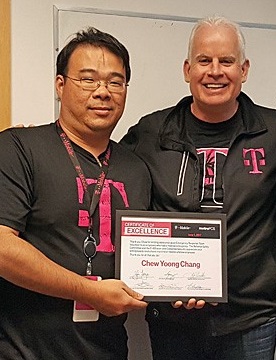 We’re talking, of course, about T-Mobile Sr. Systems Architect Chew Yoong Chang. Luckily for his co-worker, Chew didn't choke when he was needed most.

As his work-neighbor showed signs of a struggle after a bite of his morning bagel, it took only a moment more and a few quick-but-calm strides for Chew to get behind his work-mate and begin the Heimlich maneuver.

Emergency Response Team member Miles Raymond also heard something amiss and came promptly to the scene, but Chew was already in position.

Three or four compressions later, the bite of bagel was out and Chew’s teammate was breathing free.

When asked later about his assured response to what was clearly a life-threatening situation, Chew put a plug in for training, noting he recently took advantage of T-Mobile offerings to renew his CPR certification.

Way to be, Chew! The entire T-Mobile family owes you a massive thanks.