In recent testing by RootMetrics®, Sprint is #1 with the fastest download speeds in Boston.1 Indoor and outdoor testing was conducted during peak-usage hours during the day in the busiest areas of Boston. Samples were collected in iconic tourist areas, top travel destinations, business districts, retail shops, major entertainment areas, and other high-traffic areas. The end result is testing that shows how carriers perform in the busiest parts of Boston, and the results also evaluate how well networks are prepared for upcoming 5G and IoT deployments.

Additionally, analysis of Nielsen drive test data shows Sprint has the most improved network in Boston with a 292% increase in download speeds year-over-year.2 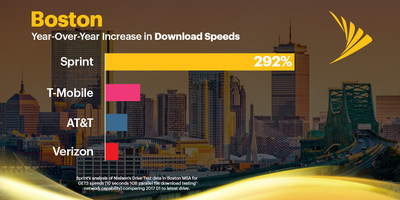 “We’re excited that our Next-Gen Network investment is making a real difference for customers in Boston,” said Mark Walker, Sprint’s vice president for Network, Northeast. “With an LTE Advanced network that’s built for unlimited, customers are getting faster movie, music and game downloads, and a great overall experience using their favorite devices.”

Sprint’s Next-Gen Network Investment in Boston
This year, Sprint has spent billions on its Next-Gen Network build, unleashing the company’s strong spectrum holdings to dramatically improve coverage, speed and reliability for its customers. Across Boston, Sprint continues to add new cell sites and upgrade existing cell sites to use all three of its spectrum bands (800 MHz, 1.9 GHz and 2.5 GHz) to improve coverage and provide its fastest, most reliable service. The company has also added hundreds of indoor and outdoor small cells throughout the greater metropolitan area to deliver even more coverage, capacity and speed using unobtrusive units on telephone poles, street lights and other infrastructure.

Sprint also continues to enhance service in Boston’s public venues. For example, the company deployed its 2.5 GHz spectrum across the MBTA system for faster data speeds, and it increased network capacity at Fenway Park by approximately 30% in time for the Red Sox World Series Championship run.

In addition, Sprint has rolled out LTE Advanced technologies including 256 QAM, 4X4 MIMO, enhanced Beamforming with Transmission Mode 9 (TM9) and two- and three-channel Carrier Aggregation for faster data speeds than before. In addition, Sprint is enhancing its upload speeds with capabilities such as Uplink Carrier Aggregation, 64 QAM and High Performance User Equipment (HPUE).

These technologies provide the foundation for Sprint’s LTE Advanced capabilities, now available nationwide and delivering up to 2X faster speeds on capable devices.3

To spread the word about its network improvements, along with offering the best value for Unlimited with Basic, Plus and Premium plans and other great holiday deals, the company is conducting an aggressive marketing campaign through the holiday season. Efforts include TV, radio, outdoor and digital ads, along with in-store signage and materials.

About Sprint:
Sprint (NYSE: S) is a communications services company that creates more and better ways to connect its customers to the things they care about most. Sprint served 54.5 million connections as of Sept. 30, 2018 and is widely recognized for developing, engineering and deploying innovative technologies, including the first wireless 4G service from a national carrier in the United States; leading no-contract brands including Virgin Mobile USA, Boost Mobile, and Assurance Wireless; instant national and international push-to-talk capabilities; and a global Tier 1 Internet backbone. Today, Sprint’s legacy of innovation and service continues with an increased investment to dramatically improve coverage, reliability, and speed across its nationwide network and commitment to launching the first 5G mobile network in the U.S. You can learn more and visit Sprint at www.sprint.com or www.facebook.com/sprint and www.twitter.com/sprint.