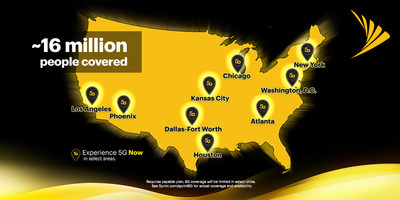 “It’s exciting to expand our footprint and see customers experience True Mobile 5G for the very first time in some of the biggest cities in the U.S.,” said Dr. John Saw, Sprint CTO. “We’ve been working hard to increase 5G coverage inside our nine cities and build a showcase experience for our customers, but this is just the start, showing the power of what we can achieve with T-Mobile. Together we’ll build a better, faster, nationwide mobile 5G network that unleashes this performance across the entire country to benefit all U.S. businesses and consumers.”

Sprint 5G is now available in new locations within its nine cities. For example, in New York, service has expanded to more parts of the Upper West Side, Harlem, and South Bronx; new parts of Queens and Brooklyn, as well as Paterson, Lodi and East Orange in New Jersey. In Los Angeles, 5G is now available in new areas such as Torrance, Southgate, Lancaster and Buena Park. The company has lit up new places in the greater Washington, D.C. area including Fort Dupont and Deanwood, parts of Bladensburg and Fairmont Heights in Maryland, and parts of Bailey’s Crossroads and George Mason University in Virginia. In Phoenix, customers can now experience Sprint 5G around more parts of ASU, at Chase Field and in Mesa; while Atlanta service has been expanded from College Park to Alpharetta, and from Marietta to Lawrenceville. Service has also expanded into portions of Garland, South Dallas and Plano in Dallas-Forth Worth; and has expanded to more Northwest and South parts of Houston. Customers can check availability of service in all nine metro areas by viewing Sprint 5G coverage maps down to the street level at www.sprint.com/coverage. 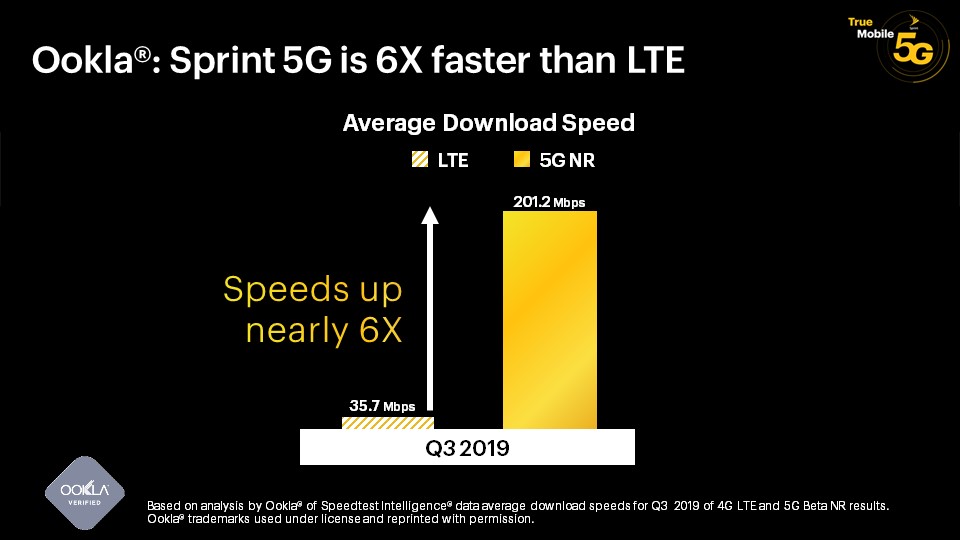 Independent tests also report strong coverage for Sprint 5G, stating “Sprint was the only carrier with a meaningful 5G footprint” in the cities tested. In a drive test by P3 covering 1,704 miles within nine Sprint 5G cities, testers found they could maintain a 5G connection up to 80% of the time.* While on Sprint 5G, testers clocked an average download speed of 144 Mbps and a peak download speed of more than 600 Mbps.2 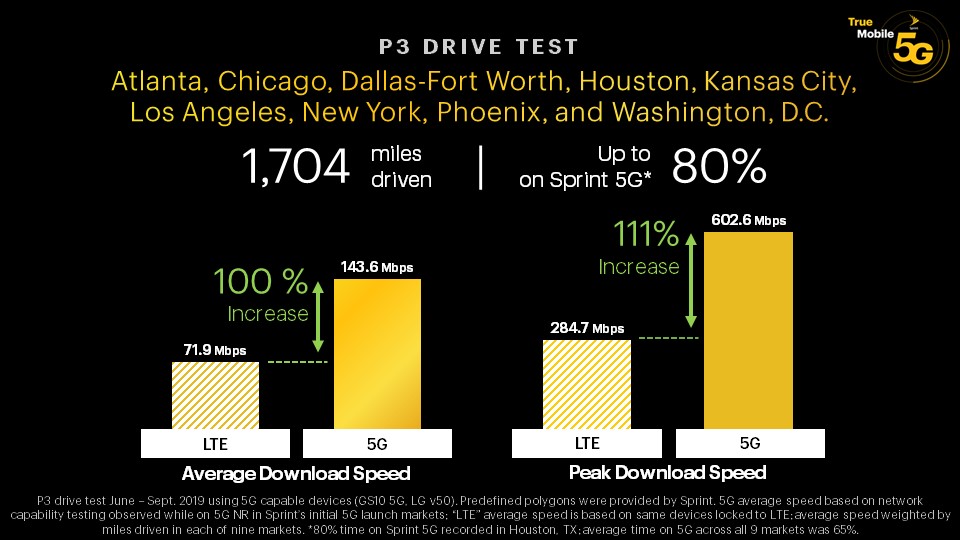 With True Mobile 5G services available in metro areas of nine U.S. cities, Sprint continues to advocate for a merger with T-Mobile to accelerate the deployment of a ubiquitous, nationwide 5G network that includes coverage in rural locations. Sprint’s existing 5G deployment shows the potential of 5G, and the combined company will have the resources and technology to bring that potential to reality by building a 5G network that fuels innovation across every industry, dramatically increasing competition, unleashing new economic growth, and creating thousands of jobs and billions of dollars in U.S. economic value. Together, the combined company will lead the world in next-generation technology services and applications, bringing 5G service to nearly all Americans.

About Sprint:
Sprint (NYSE: S) is a communications services company that creates more and better ways to connect its customers to the things they care about most. Sprint served 54.3 million connections as of June 30, 2019 and is widely recognized for developing, engineering and deploying innovative technologies, including the first wireless 4G service from a national carrier in the United States; leading no-contract brands including Virgin Mobile USA, Boost Mobile, and Assurance Wireless; instant national and international push-to-talk capabilities; and a global Tier 1 Internet backbone. Today, Sprint’s legacy of innovation and service continues with an increased investment to dramatically improve coverage, reliability, and speed across its nationwide network and commitment to launching a 5G mobile network in the U.S. You can learn more and visit Sprint at www.sprint.com or www.facebook.com/sprint and www.twitter.com/sprint.

1 Based on analysis by Ookla® of Speedtest Intelligence® data average download speeds for Q3 2019 of 4G LTE and 5G Beta NR results. Ookla® trademarks used under license and reprinted with permission.