OVERLAND PARK, Kan. (BUSINESS WIRE), May 03, 2017 – Sprint (NYSE:S) today unveiled the Sprint Magic Box, the world’s first all–wireless small cell. Sprint Magic Box is a revolutionary new plug–and–play LTE small cell for businesses and consumers that dramatically improves data coverage and increases download and upload speeds on average by 200 percent.1 The breakthrough new technology allows Sprint to very quickly and cost–effectively densify its nationwide LTE Plus network, and provide an improved experience for its millions of customers today and in the future.

The Sprint Magic Box is an indoor, self-configuring small cell, about the size of a shoebox, that’s easy for customers to install. It requires no implementation, labor, or rental costs that are a hurdle for many traditional small cell deployments. The unit is simply placed near a window and plugged into a power outlet. Sprint Magic Box connects to a nearby Sprint cell site and within minutes is up and running. Customers immediately have a better experience inside their businesses and homes while streaming videos, surfing the web, and using their favorite online apps and services. 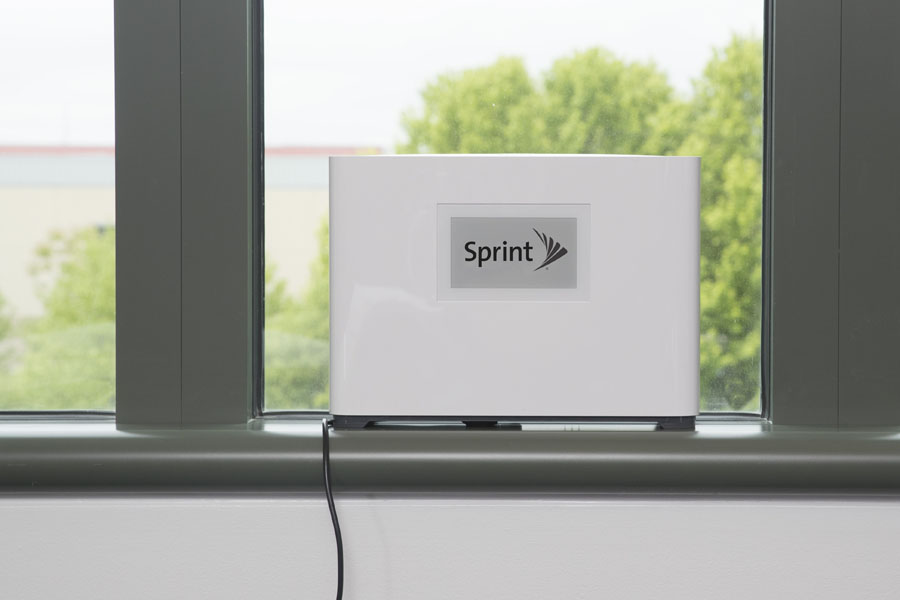 Sprint Magic Box is free to use for qualifying businesses and consumers.2

Accelerating Sprint’s Network Densification Strategy
Sprint Magic Box greatly accelerates Sprint’s strategy to densify its network as it improves performance and builds a strong foundation for 5G. It uses Sprint’s ample, dedicated 2.5 GHz spectrum with backhaul provided by Sprint’s outdoor macro cell sites. This removes the cost of backhaul, along with many of the challenges typically associated with small cell deployments, providing a low-cost, effective way to make the Sprint network – already performing at its best–ever–levels – even better for customers.

“Sprint Magic Box is going to quickly transform our network, and it is key to delivering an amazing experience to customers today as we build the kind of dense urban infrastructures needed for 5G,” said Dr. John Saw, Sprint CTO. “By leveraging our deep spectrum trove, Sprint has the ability to blanket its network with an all-wireless small cell that delivers this kind of dramatic performance boost with zero backhaul, permitting, and engineering costs.”

Unleashing Sprint’s Spectrum Advantage
The development of Sprint Magic Box is part of Sprint’s ongoing program to improve its network through its Densification and Optimization strategy using some of the most advanced technologies in wireless. With 204 MHz of spectrum nationwide, and more than 160 MHz of 2.5 GHz spectrum in the top 100 U.S. markets, Sprint has more spectrum capacity than any other U.S. carrier, an advantage that Sprint Magic Box is designed to maximize.

Sprint Magic Box is one of many network innovations taking advantage of the company’s deep spectrum holdings. Sprint continues to improve coverage, reliability and speeds by adding more capacity where it’s needed with a toolbox of solutions including three-channel carrier aggregation and HPUE. In March in New Orleans, Sprint was the first carrier to debut Sprint Gigabit Class LTE on a live commercial network in the U.S.

Looking ahead, Sprint will continue its deployment of three-channel carrier aggregation on 2.5 GHz sites. The company also anticipates leveraging a multitude of advanced technologies including four-channel carrier aggregation, 256 QAM, 4×4 MIMO (multiple-input, multiple-output) and Massive MIMO to further enhance the capacity and coverage of its 2.5 GHz TDD-LTE spectrum.

Business and consumer customers interested in the Sprint Magic Box can learn more about product availability and see if they qualify for the product at www.sprint.com/getmagicbox.

For Media: More information about Sprint Magic Box is available at https://newsroom.sprint.com/magic-box.

About Sprint:
Sprint (NYSE: S) is a communications services company that creates more and better ways to connect its customers to the things they care about most. Sprint served 59.7 million connections as of Mar. 31, 2017 and is widely recognized for developing, engineering and deploying innovative technologies, including the first wireless 4G service from a national carrier in the United States; leading no-contract brands including Virgin Mobile USA, Boost Mobile, and Assurance Wireless; instant national and international push-to-talk capabilities; and a global Tier 1 Internet backbone. Sprint has been named to the Dow Jones Sustainability Index (DJSI) North America for the past five years. You can learn more and visit Sprint at www.sprint.com or www.facebook.com/sprint and www.twitter.com/sprint.

2 If a customer no longer wants the Sprint Magic Box at their location, Sprint will make arrangements for the customer to return the device at no cost. Sprint may charge up to $140 to a Sprint customer’s service account if the device is not returned.