For Aaryanna Nijjar (She/They), May is a time where she can’t help but feel with a certain acuteness the complex results of who she is today mixed with the things that have influenced her since childhood.

The graphic designer for T-Mobile’s T-Studios says as a mental health advocate from a military family with Southeast Asian heritage, Asian American Pacific Island Heritage Month, Military Awareness Month and Mental Health Awareness Month converge on her in a way that at times can be too overwhelming to put into words. Which is reason, in part, why she has a tattoo that expresses the paradox of it all on her hands — hands she uses every day to also express herself as an artist.

“It’s my favorite quote,” she explains. “It’s by André Gide. It says, ‘Everything in the world that needs to be said has already been said, but since no one was listening, it must be said again.’ That in itself, it inspires everything I do in life, including art, but advocating for mental health too.”

She continues: “I struggle with my mental health — I really started struggling with it as a teenager, growing up in a military family and feeling very alone. Then you bring my ethnicity into it, and including that into those experiences, it can be very ostracizing. It feels like a displacement all over the place.”

We sat down with Aaryanna to talk about how her heritage, her military family upbringing and the attention to her own mental health has influenced the person and the artist she is, this May and beyond.

You are currently a content creator, but did you always want to work in an artistic field?

Growing up, I always loved being involved with art. I come from a military family, so we moved about every three years so everything was always moving and that’s when I started getting into photography. I really held onto that throughout my entire childhood and then into my adult life as well. Just that feeling of allowing things to stop for a singular moment and breathing within that moment, whether that be through art or photography or sculptures. But I never had a professional or educational background in art: all self-taught. I think that’s the brilliant thing about art, it doesn’t have to be expensive. You don’t have to be in a big role, you can just create and you can feel. It’s an incredible thing. It’s so much more than a job for me. 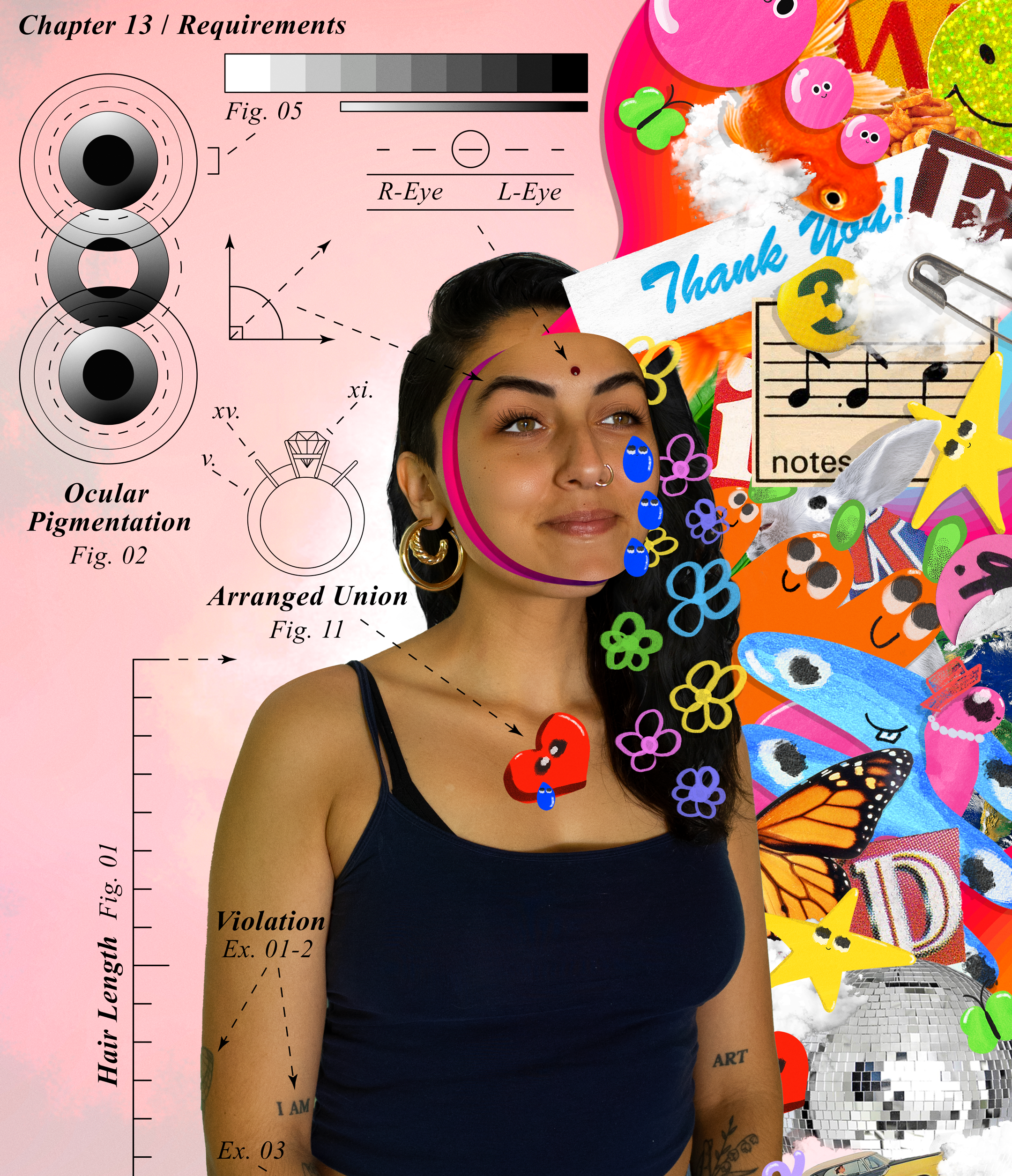 One thing that always highlighted that intersectionality for me was the question, where are you from? Interestingly enough, during the month of May, getting questions like that is complex.

How has growing up in a military family alongside your cultural identity influenced you as an artist?

Both of my parents were in the military, and that’s where they met. I was born in California and we were stationed in about seven different places. I’ve also lived in Alaska, Oregon, North Carolina, just to name a few. My father is Indian, and he immigrated to the United States when he was about four years old. My mother's Italian, but lived in Boston her entire life. My culture has shaped me in numerous ways, mostly through color. It’s really interesting when you look at Bollywood films, you see tons of colors — in Indian culture we celebrate color. I think that to a core is so beautiful, and I definitely use that as momentum to push my art in different ways.

One thing that always highlighted that intersectionality for me was the question, where are you from? When I started a new school every three years, they were always saying, “Where are you from?” Interestingly enough, during the month of May, getting questions like that is complex. Are they asking me where I was originally stationed with the military, or are they asking because of my complexion? I remember asking my mom, like, “What am I supposed to say when these kids are asking me these things?” It’s a really interesting question for me specifically.

You’re very vocal about mental health wellness and overall awareness. What advice would you have for someone beginning their own journey with self-care?

My thing that I recommend the most for mental health quite genuinely is therapy. I find therapy to be incredible. I’m an advocate for it. And not just traditional therapy because I think there are forms of free therapy. Some people just need to reach out and talk to a friend. I think it’s important not to isolate yourself, and to practice self-care. Oftentimes within society, we picture self-care as bubble baths and face masks, and that’s awesome and that is self-care to a point. But it’s also taking space in other ways. It's important knowing when to set boundaries and when you shouldn't include certain people in your life. For example, my Instagram is where I do a lot of mental health and eco-activism, but I have not posted on social media in about a year. I took a break for my mental health.

What does this month mean for you in terms of celebrating simultaneously all these things: Asian American and Pacific Islander Heritage Month, Mental Health Awareness and Military Appreciation Month?

It’s transformative for sure. It has brought up a lot of conversations that have been challenging, and I’m appreciative of that. May even leading into June and what June represents as well [with it being Pride month], and being included in that, it is a lot of transformation. I have a project just coming out that connects to this. T-Mobile Careers reached out to me and they asked me to do a self-portrait and they gave me full free range on it.

I created a piece where it’s split down the middle. The left side portrays things that were expected of me as an Indian individual growing up, and in an American society. Then on the right side, it shows who I truly am: queer and creative, and maybe a little weird. It's just very interactive and it has sparked a lot of conversations. It's been great to share my background and things of my culture and not only the joys of it, but really what it means to be a woman in my place, to be an individual in my place.